By Richard Rosenblatt and Ed McNamara

Essential Quality, Medina Spirit and 26 other 3-year-olds will be off and running Saturday in a trifecta of Kentucky Derby prep races with ‘win-or-run-second-and-you’re-in’ implications.

The star of the cross-country show is unbeaten Essential Quality, the Breeders’ Cup Juvenile (G1) winner, 2-year-old champion, and currently the top contender for the Derby on May 1.

Winner of his weather-delayed 3-year-old debut in the Southwest (G3) at Oaklawn on Feb. 27, the Brad Cox-trained Essential Quality is the 3-5 morning-line favorite in the $800,000 Blue Grass Stakes (G2), which drew a field of nine. 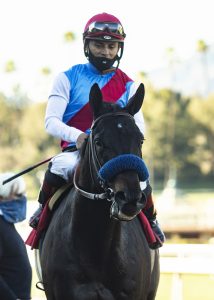 Medina Spirit, one of six-time Derby-winning trainer Bob Baffert’s top prospects this year, is the likely favorite in the $750,000 Santa Anita Derby (G1), which drew a field of 10. Baffert is seeking his 10th Santa Anita Derby win.

The fields are dotted with Derby contenders currently with points, but would likely need to win or run second, or maybe third, to secure a spot in a maximum field of 20.

Essential Quality, currently 11th on the Derby points leaderboard is all but in, along with Weyburn, entered in the Wood and ranked 10th on the leaderboard.

Medina Spirt, winner of the Robert B. Lewis (G3) and second twice to stablemate Life Is Good [a top Derby contender now sidelined], is 15th on the leaderboard [34 points] and picking up points for him is important.

Any horse who wins and earns 100 points will earn a spot in the Derby field; 40 for second likely puts any of the 28 horses in the running and would likely clinch a Derby berth for any horse coming into the races with 10 points.

Profiles for the top contenders for each race:

He’s 2-for-2 at 1 1/8 miles at Aqueduct, the distance and site of Saturday’s Wood Memorial, which is why Chad Brown’s late-running colt is the 5-2 favorite in New York’s top Triple Crown prep. His combined margin in those races was six lengths, so he should be tough to beat. He needs at least a second-place finish [40 points] to have a good chance to qualify for the Kentucky Derby, because he has only 10 points.

Brown won the trainer’s Eclipse for four consecutive years, but he hasn’t been a force in the spring classics. His only win in the Triple Crown series was with Cloud Computing in the 2017 Preakness. He’s been a world-class horseman for many years, and lack of success in the Derby and Belmont is the only hole in the resume of this future Hall of Famer. He’s also never won the Wood.

He’s always been upbeat about Risk Taking’s quality and stamina.

“Everyone that’s touched the horse has commented about how classy he was,” Brown said after his 3 3/4-length win Feb. 6 in the Withers Stakes. “They talked about the ability that he has and how he will get better with time and distance.”

Trainer Jimmy Jerkens, the son of Hall of Famer H. Allen Jerkens, is hoping for his second Derby starter with this 46-1 winner of the Gotham (G3) on March 16.

A late-nominee to the Triple Crown races at a cost of $6,000 to the owners, the Canada-bred will attempt to become the first Gotham-Wood winner since I Want Revenge in 2009.

Weyburn, with 50 Derby qualifying points, is 10th on the Derby leaderboard, but likely needs another strong shoeing to convince Jerkens he belongs in the Derby.

He’s done everything right in four starts, displaying excellence and versatility — one front-running win, one by stalking, two coming from behind. His world-class sire, Tapit, never has produced a Derby winner.

Essential Quality’s owner, Godolphin’s Sheikh Mohammed al Maktoum, doesn’t have one after more than 20 years of trying. This could be the colt who ends those streaks.

Essential Quality probably will go off at less than his morning-line odds of 3-5, and he’s very difficult to bet against. The 2-year-old champion already has two wins there.

Klaravich Stables and multiple Eclipse Award-winning trainer Chad Brown are motivated to get to the Derby, and this guy can get them there with a strong effort at Keeneland.

Third in the Gotham, but just two heads behind the winner Weyburn [Crowded Trade was second], a runner-up finish likely gives him a chance to Run for the Roses although this is a tough field, especially with unbeaten Essential Quality the heavy favorite.

Returns to Keeneland, where he won the Nyquist Stakes back on Nov. 6, and owns a victory over Florida Derby winner Known Agenda in a maiden race on Sept. 27 at Belmont.

He’s been overshadowed by more talented stablemates — first Life Is Good, then Concert Tour — but Medina Spirit is a tough colt who in four races has never been out of the exacta.

His two losses were to Life Is Good, the Derby favorite until he was sidelined by a minor ankle problem. On Jan. 30, Medina Spirit won a three-horse photo in which future Louisiana Derby winner Hot Rod Charlie finished third.

“I thought he was beat,” trainer Bob Baffert said. “He’s got game. He beat a good field.”

This son of the obscure sire Protonico has grit and quality and win or a second in the Santa Anita Derby sends him to Churchill Downs.

He hasn’t been great so far, and he’ll need to a darned good effort in what looks like a tough 10-horse field.

A runner-up finish to Spielberg in the Los Alamitos back on Dec. 19 earned him 4 Derby qualifying points, so first or second on Saturday is a must.

Trained by two-time Derby winner Doug O’Neill, who also conditions Derby bound Hot Rod Charlie, the bay colt purchased for $180,000 owns just a maiden win on a resume that reads 6-1-1-0. Among others in the field that are in a similar Derby points situation – other than Medina Spirit – include Dream Shake, Roman Centurian, and Parnelli.