It’s hard to believe it’s been a decade since the great Zenyatta last won the race that would eventually bear her name – the Zenyatta Stakes (G2).

The Hall of Fame mare had won the race three times before – then known as the Lady’s Secret — and all three victories served as preps for the Breeders’ Cup. One was for her victory in the 2008 BC Distaff (G1), another was for her greatest win in the 2009 BC Classic (G1) and the last came before the only loss of her career – by a nose to Blame in the 2010 BC Classic at Churchill Downs. 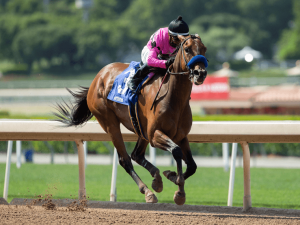 The race was inaugurated in 1993 as the Lady’s Secret, named for the Hall of Famer and 1986 Horse of the Year. In 2012, Santa Anita hanged the name to the Zenyatta Stakes to honor the mare who left her mark not only on California racing, but became a household name worldwide for her dance moves, stunning come-from-behind style and impressive record of 19 victories from 20 career starts.

Only Beholder – who also won this race three consecutive times from 2013-15 – has come close to filling the enormous hoofprints the great Zenyatta left behind, though several standout names have tried.

Champion and BC Distaff winner Hollywood Wildcat won the first two runnings of the Lady’s Secret in 1993 and 1994, and since then some of the standout names to have added their name to the winners’ roster includes Grade 1 winners/champions/Horses of the Year Sharp Cat, Manistique, Azeri, Got Koko, Stellar Wind Paradise Woods (twice) and Vale Dori.

John Shirreffs is the leading conditioner in the race, having been represented in the winner’s circle by three runners five times – Manistique, Zenyatta and Paradise Woods last year while Mike Smith leads all riders with five wins.

Additionally, the 1 1/16-mile test on Sunday serves as a Breeders’ Cup Challenge “Win & You’re In” event for the Nov. 7 BC Distaff (G1), so year-end implications for the division remain high. This year a field of five were entered, but Hang a Star was scratched, leaving a field of four.

The field in post-position order, with odds:

This is the 36th running of the Santa Anita Sprint Championship (G2), California’s final Breeders’ Cup Challenge “Win & You’re In” event for the Nov. 7 Breeders’ Cup Sprint (G1). This 6-furlong dash was until 2012 known as the Ancient Title and named for the great California-bred champion and Hall of Famer who spent most of his career winning at almost all distances in the Golden State.

The race was originally contested at Hollywood Park, but was moved across town to Santa Anita in the mid-80s and since then has proved to be a popular stop for some exceptional sprinters. The highly regarded Omaha Beach was victorious a year ago and two-time champion sprinter Roy H used this race as a springboard to winning the Breeders’ Cup in 2017 and 2018, as did Amazombie in 2011, Kona Gold in 2000, Elmhurst in 1997 and Cardmania in 1993. Other top runners to have won this race include Lord Nelson, Smiling Tiger, Gayego, Idiot Proof, Swept Overboard, Cardmania and Groovy.

John Sadler is the race’s top trainer, having sent out four winners, and Hall of Fame jockeys Eddie Delahoussaye and Kent Desormeaux have each ridden four to victory.

This year, five will head to the gate in the co-feature of the day, which has been carded as the eighth race with a 4 p.m. PT post time.

The field in post-position order, with odds:

Frost Giant—Sarahisittrue, by Is It True