Belmont Odds: Vosburgh Up for Grabs After Volatile’s Retirement

What a difference a horse makes, especially one as talented as Volatile.

His abrupt retirement Monday with a hairline fracture stripped the Sprint Division of a leading performer. The loss will be felt all the way to the Breeders’ Cup.

The gray son of Violence goes out a winner, having captured the Alfred G. Vanderbilt Handicap (G1) at Saratoga in his final start. 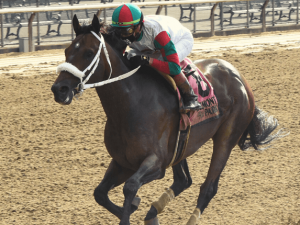 He now moves on to the next chapter, stud duty in 2021 at Three Chimneys Farm in Kentucky. Steve Asmussen, his trainer, compared Volatile to Mitole, last year’s sprint champion, and said “Volatile is as fast as any horse I ever trained.”

Volatile was his sire’s most expensive yearling sold at auction when he brought $850,000 at the 2017 Keeneland September Sale. He finished with a record of five wins and a second in six starts.

So where does that leave the division, and more pressingly, the $150,000 Vosburgh (G2) at Belmont Park on Saturday? “Up for grabs” is the short answer.

Volatile was the projected headliner for the Vosburgh with only three rivals expected to challenge. With Volatile sidelined, things opened up a bit with six names dropped in the box when entries closed on Wednesday.

The race is a Breeders’ Cup “Win and You’re In” Challenge event, giving the victor an automatic berth in the $2 million BC Sprint (G1) at Keeneland on Nov. 7.

Firenze Fire now inherits the role of Vosburgh favorite. The 5-year-old stallion trained by Kelly Breen has some unfinished business in this race, having lost the 2019 Vosburgh to Imperial Hint by only a nose in a terrific and noble effort.

Firenze Fire has two wins — the General George (G3) at Laurel and the True North (G2) at Belmont — and a trio of excusable efforts in five starts this year.

His two poorest efforts were double-digit losses over sloppy tracks in Grade 1 contests: the Carter at Belmont and the Forego at Saratoga. The other loss was the Vanderbilt by only two lengths on an afternoon when nobody was beating Volatile.

The six-time graded stakes winner is a logical contender, and the horse to beat at a short price if the track is dry on Saturday.

We are always on the prowl for value and that leads us to True Timber. The 6-year-old was a long-time member of the Kiaran McLaughlin barn and now is handled by Jack Sisterson.

True Timber shortens up to 6 furlongs for the Vosburgh and that should play nicely to his stalking style. Since the transfer to Sisterson following McLaughlin’s retirement from training, True Timber has sprinted twice with a pair of thirds in an allowance race at Keeneland and in the Forego in the slop at Saratoga.

“We had the Kelso (at Belmont on Oct. 3) in mind but the Vosburgh ended up becoming more of a wide-open race so we figured we would give it a shot,” Sisterson said.

This is True Timber’s third start following a layoff. The shorter distance and the rail should set him up nicely for a big effort.

Asmussen no longer has Volatile in the barn but he will be represented here by Engage, making his first start since rallying for fourth behind stablemate Mitole in last year’s BC Sprint at Santa Anita. The horse certainly has back class but the lengthy layoff is the primary concern.

Trainer John Terranova entered the pair of Stan the Man and Funny Guy while Share the Ride arrives fresh from a career-best victory in the Mr Prospector Stakes at Monmouth Park.

The supporting event is the $100,000 Noble Damsel (G3) for fillies and mares going one mile on the turf. The consistent Feel Glorious tries again for her first graded victory since joining the Christophe Clement stable in the spring of 2019.