Opening weekend for Santa Anita Park’s fall meet has everything covered from A to Z – from the American Pharoah Stakes (G1) on Friday to the Zenyatta Stakes (G2) on Sunday.

Both races are “Win and You’re In” to the Breeders’ Cup – the American Pharoah winner for the BC Classic (G1); the Zenyatta winner to the BC Distaff (G1).

It’ll be a blockbuster three-day opening for “The Great Race Place,” featuring seven BC “Win and You’re In” races. The Breeders’ Cup is Nov. 5-6 at Del Mar, a two-hour-plus-traffic drive down the I-5.

Santa Anita has front-loaded its stakes races as final preps for the Breeders’ Cup. There will be a total of 14 stakes, nine graded.

On Saturday, Baffert, undergoing several investigations, is expected to have Kentucky Derby (G1) winner Medina Spirit, a week after being scratched from the Pennsylvania Derby (G1) due to an unfavorable post position, according to the trainer. Baffert also scratched Private Mission from the Cotillion (G1) last week at Parx, and likely will enter her in the Zenyatta on Monday.

Baffert has been picking his spots since he’s currently suspended by Churchill Downs (pending a final decision on whether Medina Spirit will remain the Derby winner after a post-race positive for a prohibited race day medication), and still involved in legal wrangling with the New York Racing Association. 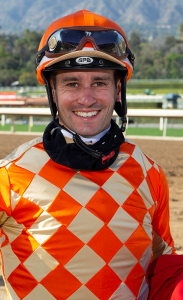 The leading trainer at Santa Anita is Phil D’Amato (three entries in the Chandelier), followed by Peter Miller. Hall of Famer Richard Mandella, as well as John Sheriffs and John Sadler should make their presence felt as well.

Flavien Prat, who won Del Mar’s riding title over the summer, comes into the meet as Santa Anita’s leading jockey in 2021 and is ranked fourth nationally with more than $17.5 million in purse earnings. He’ll be aboard likely favorite Rockefeller as well as Baffert’s likely favorite Grace Adler in the Chandelier; he also is the regular rider for Pennsylvania Derby winner Hot Rod Charlie for trainer Doug O’Neill.

Other top regular riders at the 16-day fall meet include Juan Hernandez, Umberto Rispoli, and Abel Cedillo. Count on Hall of Famer Mike Smith to spend more time at this meet, too.

“Our fans, horsemen, and Eddie Delahoussaye himself have told us they’d love to see a return to racing down this European-style course which has been unique to Santa Anita for more than six decades,” said Aidan Butler, COO, Racing Operations for 1/ST Racing.

The meet runs through Oct. 31.

The Stronach Five, a $1 minimum wager, with a 12% takeout (Fridays)

$2 Win, Place and Show on each race

50 cents Trifectas on races with minimum of 4 scheduled starters

10 cents Superfectas on races with minimum of 6 scheduled starters

$1 Exactas on each race

50 cents Mid Pick 4, available with 11 or more races on card

$1 Super Hi 5 on races with 7 or more declared starters (must pick first five finishers in exact order). If there are no perfect tickets with five winners (no consolation) 100% of net pool is carried over to next Super Hi 5 race.