We’re in the middle of June, just over a week away from the first leg of the Triple Crown – the Belmont Stakes! – and we’re still going strong with our usracing.com/news Kentucky Derby Top 10.

So what if the Derby is now the second leg of the Triple Crown, rescheduled from May 2 to Sept. 5 due to the coronavirus pandemic? And the Preakness, now Oct. 3, can actually produce a Triple Crown champion? 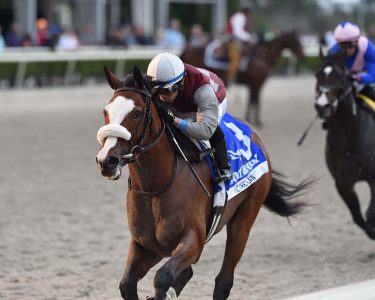 This is one long and winding road to the Derby, and today’s No. 1 (Tiz the Law) could be left in the dust come September.

We will carry on, though, and come through with an updated list when warranted. Like this week: The Santa Anita Derby (G1) on Saturday gave us a great storyline in Honor A.P., grandson of recently deceased champion A.P. Indy. The 3-year-old ridgling is trained by John Shirreffs and ridden by Hall of Famer Mike Smith, the duo that won the 2005 Derby with 50-1 long shot Giacomo.

Honor A.P. handed Bob Baffert’s Authentic his first defeat in four starts in taking the Santa Anita Derby by 2 3/4 lengths. The victory moved Honor A.P. to No. 2 in my Derby Top 10 this week, behind Tiz the Law.

“It was very gratifying to see him run that well. It was really exciting,’’ Shirreffs, who also trained the great Zenyatta, said the day after the race. “Everybody at the barn is really joyful.”

With the win, Honor A.P. earned 100 Derby-qualifying points and moved into second-place on the leaderboard behind Tiz the Law (122-120). While the Belmont is out of the question, the next start for Honor A.P. could be the Shared Belief Stakes (G1) at Del Mar on Aug. 1.

Authentic, meanwhile, managed to finish second despite breaking outward from the outside No. 7 post. Baffert has gone through some tough times with his 3-year-olds of late: Unbeaten Nadal was retired after suffering an ankle injury during a workout; unbeaten Charlatan is out of training and will miss the Belmont and Derby with a minor ankle injury; and previously unbeaten Authentic is now 3-1.

All is not lost for Baffert, a five-time Derby winner. Authentic is still in the running, and could show up next in the Haskell Invitational at Monmouth Park on July 18, Plus, Baffert also trains Cezanne, a $3.65 million purchase by the Coolmore folks and St. Elias Stables, who lived up to expectations with a win in his first career start on Saturday (taking a 6 ½-furlong maiden special weight by 2 ¼ lengths). Who knows what his future may hold?

No matter who shows up for the Belmont, Tagg says he’s really only concerned with his own horse.

“I’ve been doing this for fifty years,” Tagg said. “You don’t want to take anything for granted, but I just felt so good about the colt that I kept my attention on him and don’t worry about anyone else.”

Not much changed in the Top 10, but we’re including Cezanne at No. 10 after his successful debut.

So, with Nadal and Charlatan – two of the leading 3-year-olds — out of the picture, here we go:

Breezed 5 furlongs in 1:00.53 over Belmont’s main track … Franco aboard colt for first time since winning Florida Derby on March 28 … “He did everything we asked him to,’’ Tagg said. … One more work is expected, either Sunday or Monday, before Belmont … With four wins in five starts, this will be your Belmont favorite. No. 1 on Derby points leaderboard (122) … Next start: Belmont Stakes, June 20 … Derby Future Wager Odds: 5-1.

Santa Anita Derby win moves this son of Honor Code right to the front of the 3-year-old crew … Atoned for loss to Authentic in San Felipe on March 7 … Likely to stay in California for next race, whenever that might be … No. 2 on Derby points leaderboard (120) … Next start: Shared Belief Stakes, Del Mar, Aug. 1 (possible) … Derby Future Wager Odds: 15-1.

No longer a Belmont Stakes contender, your unbeaten Matt Winn winner (3-0) is headed to Keeneland for his next start … No. 9 on Derby points leaderboard (60) … Next start: Blue Grass Stakes, Keeneland, July 11 … Derby Future Wager Odds: 9-1.

In all likelihood, there are better horses rated below this guy, but for now  he’s deserving of this spot. Plus he’s an Uncle Mo (a favorite horse of mine) … Long shot winner of Tampa Bay Derby and runner-up to Nadal in a division of Arkansas Derby … No go for Belmont, with eye on the roses in September … No. 5 on Derby points leaderboard (90) … Next start: TBD … Derby Future Wager Odds: 36-1.

Worked 5 furlongs in 1:00.20 at Churchill Downs on June 9, fifth fastest of 22 at the distance … Distant second to Charlatan in a division of Arkansas Derby, and may be on the improve as Belmont approaches … No. 10 on Derby points leaderboard (50) … Next start: Belmont Stakes, June 20 … Derby Future Wager Odds: 56-1

Work 5 furlongs in 59.95 at Palm Meadows on June 5, and may have a new rider for next start … Velazquez seems set to be aboard Tap It To Win for the Belmont … Closed nicely to finish a neck behind runner-up Basin in a division of Arkansas Derby (won easily by Charlatan) … No. 13 on Derby points leaderboard (34) … Next start: Belmont Stakes, June 20 … Derby Future Odds: 31-1

At this point, just about anything goes on the way to the Derby, so why not this $3.65 million colt? Lived up to expectations with victory in his first career start … Distance becomes the question as to whether the son of 2-time Horse of the Year Curlin can wind up in the Derby (or even run in a Derby prep over the summer) … Stay tuned since colt was a late nomination for Triple Crown races … No Derby points … Next start: TBD … Derby Future Wager Odds: 3-1 (mutuel field).