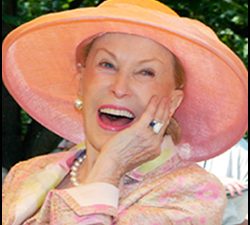 This is the kind of woman Marylou Whitney was:  In the winner’s circle after the 2004 Belmont Stakes, Marylou was in tears. Not only tears of happiness that her homebred Birdstone had just won a Classic, but tears of heartbreak, too, as a fan and supporter of the sport, knowing her horse had just ended Smarty Jones’ bid for the Triple Crown.

“We kept telling (Edgar) Prado to run second,’’ Whitney said moments after the race, referring to Birdstone’s jockey. “We all wanted Smarty Jones to win the Triple Crown. But this means a great deal to us, winning the Belmont with a homebred.”

Whitney, a breeder and owner of thoroughbreds, socialite and philanthropist, who was often referred to as the “Queen of Saratoga,’’ died on Friday at her Cady Hill estate in Saratoga Springs, New York. She was 93. The New York Racing Association announced her death.

“The queen has left us,’’ Hall of Famer Nick Zito, Whitney’s longtime trainer who saddled Birdstone, told the Albany Times-Union.

For seven decades, Marylou Whitney was a magical name in thoroughbred racing. In addition to owning Birdstone, who went on to win the prestigious Travers Stakes in the summer of 2004, Whitney also owned 2003 Kentucky Oaks winner Bird Town.

Whitney was much more than a breeder and owner. Her family’s contributions to racing went far beyond showing up in the winner’s circle to accept or present trophies. The Whitney Stakes, one of the biggest Grade 1 races for 3-year-olds and up leading to the Breeders’ Cup, is named for the Whitney family.

“An avid horsewoman and true lover of the sport, Mrs. Marylou Whitney was one of thoroughbred racing’s greatest ambassadors,’’ NYRA CEO and President David O’Rourke said in a statement. “As owner of her eponymous stable, Marylou was a top breeder and a committed supporter of the thoroughbred industry, who delivered some of the most memorable moments in New York racing.”

Born Marie Louise Schroeder on December 24, 1925 in Kansas City, Missouri, Whitney married Frank Hosford, heir to the John Deere fortune, in 1948. Ten years later, after a divorce, she married Cornelius Vanderbilt “Sonny” Whitney — one of the founders of the National Museum of Racing and Pan American Airlines. They began winning together quickly, with Tompion taking the Travers in 1960 and Chompion winning the “Mid-Summer Derby” eight years later.

In the 1970s, the Whitneys helped convince the NYRA to keep Saratoga Race Course open at a time when wagering and attendance sagged. It turned into a bonanza with the Saratoga meet now attracting more than one millions fans each summer.

“Marylou’s love of this sport and city will have a lasting impact on generations to come,’’ O’Rourke added. “On behalf of the New York Racing Association, we offer our deepest condolences to her beloved husband John, and their family and friends.” 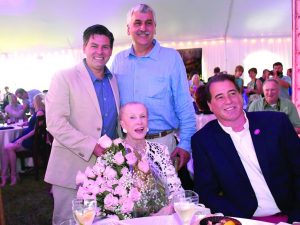 Whitney not only supported the Saratoga Springs, she — and her husband, John Hendrickson, whom she married in 1997 (five years after C.V.’s death at age 93) supported the backstretch community, providing meals for workers on a weekly basis. She also founded the popular Saratoga Performing Arts Center (SPAC), which opened in 1966 and continues to host world-class musical and dance performances.

“Marylou Whitney embodied all of the best qualities of the sport to which she devoted her time, heart, and resources,’’ National Thoroughbred Racing Association President and CEO Alex Waldrop said in a statement. “From her exceptional philanthropy to her innovative mind and indelible spirit, she was a champion of excellence in every endeavor she graced.”

After C.V.’s death, Whitney opened her own stable with Zito handling training her racehorses, and in 2003 she became the first woman to own a Kentucky Oaks winner in Bird Town. The following year came Birdstone’s shocker over Smarty Jones in the Belmont. From 2000-2019, Whitney’s stable produced more than 190 winners.

The daughter of Harry Schroeder, an accountant who attended law school with Harry Truman, Whitney attended the University of Iowa before becoming an actress, appearing in movies and TV shows. She also wrote several cookbooks. In 1994, she met Hendrickson (39 years her junior), who was an aide to Alaska governor Wally Hickel. The couple married three years later in Alaska. They were founding members of the Thoroughbred Retirement Foundation and founded the Marylou Whitney and John Hendrickson Cancer facility for Women, one of four facilities that comprise the Markey Cancer Center in Lexington, Kentucky.

In 2010, she received an Eclipse Award of Merit for her contributions to racing. Just last year, Whitney attended the racing Hall of Fame induction ceremony, which honored three generations of Whitneys as Pillars of the Turf  — Sonny, his father Harry Payne Whitney, and his grandfather Williams Collins Whitney, who purchased Saratoga Race Course in 1900 and helped create Belmont Park.

Whitney is survived by her husband and her five children, Louise “M’Lou,” Frank “Hobbs,” Henry “Hank,” Heather and Cornelia.