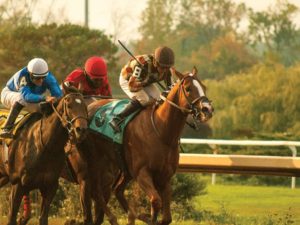 In Canada, there’s a horse racing Triple Crown for 3-year olds, just like in the United States. The distances are the same and contested in the same order, too. The first leg is the 1 ¼- mile Queen’s Plate at Woodbine just outside of Toronto at the end of June; the second leg is the 1 3/16- mile Prince of Wales Stakes, run at Fort Erie Racetrack. The crown concludes with the 1 ½- mile Breeders’ Stakes, which is back at Woodbine on Aug. 17.

For the most part, that’s where the similarities end. There are some major differences — the obvious being that the Canadian version is restricted to horses bred in Canada. We know that Canadian breds can run in the U.S. Triple Crown races and history shows us that Northern Dancer, among the greatest sires of them all, won the Kentucky Derby (G1), the Preakness (G1) and the Queen’s Plate in 1964.

The Canadian races are run on three different surfaces—the Plate on Tapeta (synthetic surface); the Prince of Wales on dirt; the Breeders’ Stakes on turf.  That certainly is a challenge, but not an impossible one as 12 horses have captured the crown since it was recognized in 1959.

There’s another unique feature that deserves attention and it concerns the second leg, the $400,000 Prince of Wales, which will be run on Tuesday at Fort Erie, the “Border Oval,” as it’s called by the locals on both sides of the Peace Bridge, which divides Fort Erie with Buffalo, New York.

The track holds a personal significance, as it was the first track I ever visited back in 1985. My friend’s Dad was a hotwalker and even though we were only 17, we managed to donate some money to the track via the betting windows on that summer Sunday afternoon.

The race date of Tuesday is not a misprint. For decades, the Prince of Wales was contested on Sunday, but that changed in 2013. Like many tracks, Fort Erie was struggling to survive and like many, slots on its grounds saved it. In 2012, the slots were taken away and it looked like the track was headed for closure. The track managed to hold on by reducing race dates and trying to find a suitable buyer.

The Fort Erie Live Racing Consortium eventually purchased the track in 2014 and one year earlier, it was decided to move its signature event to a Tuesday evening.  The reasons were simple.  For starters, Saratoga, Del Mar and many other tracks are dark on Tuesdays.  There was less inventory and that allowed the Prince of Wales to get some much needed attention.  TVG showcases the race and in Canada, TSN broadcasts the race live.

“There was some pushback for a bit,” said Antonietta Culic, the marketing and media relations Director for the track, “but at the time our Tuesday twilight racing card was doing well, so it was decided to move the POW and see if we could take advantage of that.”

The track has 40 racing dates — Sundays and Tuesdays over 20 weeks from May through October. Sunday post times are at 1:20 pm, and from May through August, Tuesday posts are 4:20 p.m. Because the track doesn’t have lights, Tuesday afternoon posts are required in September and October.

Another reason for the Tuesday post: traffic. Toronto is within an hour of Fort Erie and weekend traffic can be a bear. Many Canadians come across the border on weekends, while many Americans own cottages in Canada. Believe it or not, there is less traffic on a Tuesday night. And, because 20 percent of Fort Erie customers come from the Buffalo area, bridge traffic is less congested on Tuesday afternoons and evenings.

“Weather is always a concern,” Culic said. “People won’t come if the forecast is bad and last year, people left early because of the heavy rain and we still did well with on-track handle.”

The rain was so heavy that eventual winner Wonder Gadot was nearly scratched by trainer Mark Casse. Jockey John Velazquez convinced the trainer to let her run and the conditions didn’t bother her at all as she romped to victory.

In today’s very crowded sports market, you have to do more than say, “come join us for the second leg of the Canadian Triple Crown,” to draw the crowds and the track has a sound plan.

“We have lots of food trucks for Prince of Wales night,” said Culic, “and we have live music between races. After the races, we have a live band and people stay well after dark to hear them.  This year, we are bringing in Jonesy http://www.jonesyniagara.com/ one of the bigger cover bands in our area.  Prince of Wales night has become quite a festive night and a fun place to be on a Tuesday night in late July.”

As for the race, it looks the Plate winner, One Bad Boy will enter, but Culic couldn’t confirm that because the California based colt would have to supplement in. Avie’s Flatter and Tone Broke, the second- and third-place finishers in the Plate appear headed to Fort Erie, so having the top three Plate runners should make for an exciting race.

I’ve watched many of these races over the years and one would be hard pressed to find a better one than the 1990 champion, Izvestia, whose motor and ability to glide over the race track was second-to-none. See for yourself:

So fear not horse racing fans. There is no need to lament Saratoga and Del Mar being dark on Tuesdays as Fort Erie offers twilight racing and $400,000 major stakes race. The special post time is 3:55 p.m. ET, with the Prince of Wales scheduled to run at 7:40 p.m.