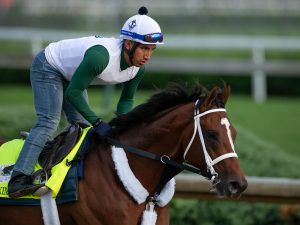 The $1 million TVG.com Haskell Invitational was run in the heat of the night, and depending on your point of view, it either helped or hurt a sport being scrutinized for its safety record. Oh, and by the way, there was another inquiry in a big race involving Maximum Security.

This time, his number stayed up as the 3-year-old colt trained by Jason Servis held off Mucho Gusto at steamy Monmouth Park to reestablish himself as the leader in the division. The 1 1/8-mile race went off at 8:12 p.m. ET on Saturday, about 2 ½ hours later than scheduled due to intense heat that curtailed the card.

Maximum Security had finished first in the Kentucky Derby (G1) on May 4, but was disqualified to 17th for interference. There has been much debate about the DQ and there are lawsuits still pending (Country House, who finished second, was declared the winner). At Monmouth Park, where the temperatures soared into the high 90s and the heat index was up to 107 degrees, officials were well aware of the issues, but decided to get in all the scheduled stakes races and cancel the others.

“When he was doing as well as he was coming up to the race I had every reason to be confident.,’’ said Servis, whose colt ran second to King for a Day in the Pegasus Stakes at Monmouth in his first race after the Derby.  “My horse has a lot of heart. He does not mind going head-to-head with any horse.”

Servis said the Travers Stakes (G1) at Saratoga  Race Course on Aug. 24 is a possibility, but “the Travers would be three Grade 1 races in 72 days. We’ll see how it goes and do whatever is right for the horse.”

For those who either stayed at the Jersey Shore track for more than eight hours, or left for a bite to eat or a dip in the ocean and returned, they saw a bang-up horse race.

Maximum Security ($3.60), the 4-5 favorite in a field of six (Joevia was a trainer scratch), broke sharply and battled three-wide as Bethlehem Road and King for a Day led the field through an opening quarter-mile in 22.92 seconds, with the half going in a brisk 46.71. Given his cue by jockey Luis Saez, the Gary and Mary West color-bearer stuck his nose in front on the far turn and fought off a late bid from Bob Baffert-trained Mucho Gusto to win by 1 ¼ lengths in 1:47.56.

With a dangerous heatwave affecting over 100 million people, other racetracks in the Northeast, mid-Atlantic and Ohio Valley regions canceled Saturday racing. But Monmouth Park carried on.

It sort of worked out, although the marquee race at the meet was not televised nationally by NBC Sports because of the delay. The original post time was 5:47 p.m. ET.

Nonetheless, all the stakes races were run, and with Maximum Security’s victory in the Breeders’ Cup “Win and You’re In” qualifier, it reaffirmed his status as the top sophomore heading into the second half of the season.

Dennis Drazin, chairman and chief executive of Darby Development, operators of Monmouth Park, said a group of track, state and independent veterinarians monitored the heat for days and felt it was safe to race.

“However, given the heightened concern from the public about the heat, and in the interest of the safety of the horses and jockeys, we’ve decided to proceed with an abundance of caution, to cancel the remaining non-stakes races and to delay the six stakes races,” Drazin said hours before the Haskell.

“It would have created additional momentum to the crisis that already exists because of California problems,” Drazin said of a possible threat to horses. “We’re on the cusp of a crisis in the industry.”

“Animal rights activists protested outside the track before the first race was to run.

“The start of the first race was delayed by almost 40 minutes. The 14-race card was reassessed after the next race. The six stakes races were reset for 6 p.m.

The first two races went off without incident. The horses were hosed down on the track after the races. There were misting fans in the paddock before the races.

Sunday racing at Monmouth has been canceled due to even higher temperature forecasts.