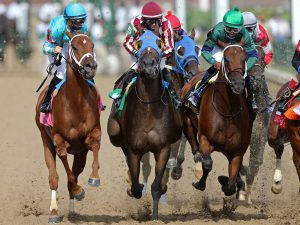 The Q-rating of the Jim Dandy Stakes, traditionally a Travers prep, plummeted when it was switched this year to Sept. 5, Kentucky Derby Day. Liveyourbeastlife ran big, rallying from last of six to run second by three-quarters of a length to Mystic Guide. Might have gotten there with a better trip, but unless you played him to win at 14-1, the reaction was “So what?”

This colt has been true to his pedigree, with a win and a second in two starts at 1 1/8 miles. “He didn’t show much early on,” trainer Jorge Abreu said, “but every jockey that rode him never came back with a negative thing about him. They would say, ‘This horse wants to run long.’ ”

He’s improving, and distance is not an issue, but he’ll have to make a quantum leap to compete with Authentic and Art Collector. To me, a win bet is out of the question. If you like to spray for third and fourth in exotics, he deserves consideration.

Notes: Lawrence co-owned 2017 Preakness hero Cloud Computing, Chad Brown’s only winner in a Triple Crown race … This will be the first Preakness try for the New York-based Abreu, who went out on his own in 2016 after eight years as an assistant to Brown. Abreu, who finished first with four of his first five starters, never has won a graded stakes. The 44-year-old native of the Dominican Republic also worked for Nick Zito and John Terranova … A 5-furlong work Sept. 17 at Belmont convinced Lawrence to supplement for $25,000 to the Preakness. “He went in 59 and 4, which is something he’s never done before,” Abreu said. “We’re going to take a shot.”