Racing returns to Keeneland as the fall season opens for its three-week, 17-day meet on Friday (Oct. 2) and runs through Oct. 24. The meet will attract big fields and excellent horses befitting the world epicenter of thoroughbred racing in Lexington, Kentucky.

Keeneland’s 18 stakes races include six Grade 1’s – five of which are during the prestigious “Fall Stars Weekend” Oct. 2-4. On Saturday, there are five graded stakes, and there will be a bunch Breeders’ Cup challenge “Win and You’re In” races. The Breeders’ Cup returns to Keeneland on Nov. 6-7. There will be no spectators at Keeneland, either at the fall meet or at the Breeders’ Cup, due to the COVID-19 pandemic. 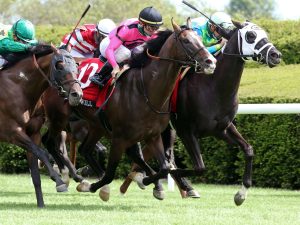 War of Will – Courtesy of Keeneland

When looking ahead to the Breeders’ Cup, it is important to remember that the winners of more than 40 Breeders’ Cup races through the years have made their final prep at Keeneland’s fall meet. Keeneland’s most productive preps in that regard, historically, have been in the Thoroughbred Club of America (BC Filly & Mare Sprint), Spinster (BC Distaff), Shadwell Turf Mile (BC Mile), Alcibiades (BC Juvenile Fillies), and Breeders’ Futurity (BC Juvenile).

Since Keeneland’s fall season is only three weeks long and the meet’s stakes are front-loaded so they can be Breeders’ Cup prep races, the time is now for handicappers to start brushing up on some of the things they need to know to make money at the fall’s marquee meet.

Historically, Keeneland has always been known as an inside speed paved highway in terms of handicapping. That all changed during Keeneland’s Polytrack era, but these days that good old rail has returned on the main track. The No. 1 post can be expected to win at nearly 20% in dirt sprints and at around 25% in dirt routes. For example, at the abbreviated 2020 Keeneland summer meet, the dirt rail won 17% of the sprints and 22% in routes. In dirt sprints, horses seem to have a fair chance all the way out to post 11, with inside, middle, and outside posts all offering fair win percentages. In two-turn dirt route races at a mile or more, horses can also win from any part of the starting gate, but overall, the inside posts 1-5 offer the best win percentages. This summer, no horse won from outside post 8.

Post positions are very important handicapping factors on the Keeneland grass course, and this factor will play out throughout the meet.

In Keeneland turf routes, inside posts are good, but middle posts are also fine all the way out to post 7. The far outside posts, however, are not great at most distances on the Keeneland grass. Based on a large sample size in turf routes run at Keeneland since the fall of 2014, various posts 1-7 all yield between 10%-14% win rates, but the outside posts average far worse. The least advantageous turf races for outside posts will definitely be at one mile, and the absolute worst posts for all turf routes at Keeneland are posts 10 and outward. Those posts combined to go 0-for-47 a few years ago and have been only slightly better since.

One thing that differentiates Keeneland from so many other places is that they routinely run on wet turf courses that are listed as yielding or something else other than firm. Don’t overlook these softer turf course past performances when looking for value, because they can be a source of some of the best long shot payoffs at the meet.

Handicappers in these races often make the mistake of paying too much attention to a horse’s recent form, even if it’s on firm turf, while ignoring what is in many cases much more relevant – whether or not the horse can run its best race on yielding or soft turf courses. Remember that certain horses like firm turf while others prefer a little bit of give in the ground. If you can differentiate between the two in the past performances, you will have a big advantage over the general public in the races run on less-than-firm turf.

Keeneland doesn’t card very many turf sprints, but there’s more being run now than before. With stats in these races going back to 2006 you can build a Keeneland turf sprint winning profile despite the fact they don’t run many annually. Based on the long-range stats, Keeneland’s turf sprints seem to favor two things — off-the-pace runners that rally from between two lengths and six lengths behind with a half-mile to run, and middle-to-outside posts.

Several post positions win at double-digit percentages, including posts 8, 9, 10 and 12, so upgrade outside runners in those races if the betting public mistakenly overlooks them.