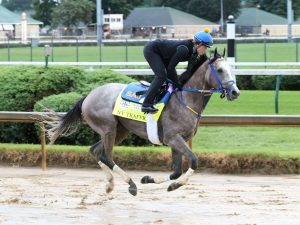 Before finishing a career-worst eighth in the Kentucky Derby, he was 4-for-4 (three seconds) in the money in graded stakes this year. Problem: He didn’t win any of those races.

It’s possible that like beaten favorite Tiz the Law, Ny Traffic disliked Churchill Downs’ quirky surface. Trainer Saffie Joseph Jr. decided to give him another chance in the Preakness after watching him breeze 4 furlongs in 48 seconds, second fastest at the distance, Sunday at Churchill. It was his first timed workout since the Sept. 5 Derby.

Ny Traffic chased Authentic in the Derby and was only a length behind after 6 furlongs. He was fourth after a mile before he began to drop back. He had just lost by a nose to Authentic in the Haskell, so he was expected to run much better in Louisville.

Can he regain the form he showed that day at Monmouth? Difficult, but not impossible. I don’t see Ny Traffic ending his stakes slump Saturday, but I give him a better chance than many of his rivals. Probably will be a pace casualty again, but not the worst stab with a small wager at big odds.

Notes: Paco Lopez rode Ny Traffic in the Derby, but he’ll be on Max Player for Steve Asmussen in the Preakness.