A few weeks ago, Hall of Fame trainer Steve Asmussen acknowledged Pneumatic would show up for the 145th Preakness (G1) on Oct. 3, giving the trainer a shot at victory No. 3 in this classic to go with wins by Curlin in 2007 and Rachel Alexandra in 2009.

In the past few days, Asmussen came up with two more Preakness starters in Max Player and Excession. All three will take on Kentucky Derby (G3) winner and favorite Authentic in the final leg of the reshuffled 2020 Triple Crown season. 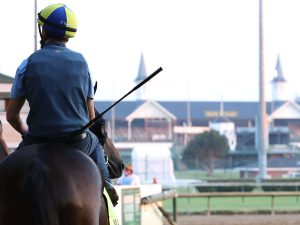 Asmussen, who recently became the second trainer to hit the 9,000-win mark, is expecting a strong weekend at Pimlico, where 11 of his 15 wins at the track have come in graded stakes races.

“We think we will have a lot of live action for the weekend, and I expect a couple of winners to add to the total,” said Asmussen, who will have several other runners in stakes races on the card. “At this stage, we’re just blessed with some extremely talented horses and it is an important event for us. Preakness weekend has always been a big deal to us, and we’ve been fortunate to have fastest-enough horses to run in the races they offer.”

The COVID-19 pandemic forced racing to shift its Triple Crown schedule, with the Belmont Stakes (G1) first on June 20 (Tiz the Law won) followed by the Derby on May 5.

Strict health and safety protocols are in place at Pimlico for personnel permitted inside the gates, including jockeys, trainers, owners, and employees. No spectators will be in attendance, as was the case at the Belmont and the Derby.

The field for the 1 3/16-mile is nine and maybe counting: the big decision comes any time before Monday’s post-position draw at 12 p.m. ET, when trainer Ken McPeek reveals whether his filly Swiss Skydiver is in or out.

On Saturday, the Alabama (G1) winner who ran second in the Kentucky Oaks (G1) to Shedaresthedevil, worked 5 furlongs in 1:00.80 at Churchill Downs under jockey Tyler Gaffalione.

McPeek told Daily Racing Form’s Marty McGee he’s “leaning toward” the Preakness. Rachel Alexandra was the most recent of five fillies to win the Preakness.

The rest of the field, for now

Authentic, trained by Hall of Famer Bob Baffert, has a final workout planned for Monday at Churchill Downs before arriving in Baltimore on Tuesday. Stablemate Thousand Words also work on Saturday at Churchill, covering 5 furlongs in 1:00.60 under jockey Florent Geroux.

Art Collector, the expected second choice in the Preakness, worked 4 furlongs in 48.00 under jockey Brian Hernandez, Jr. up.

Pneumatic won Pegasus Stakes at Monmouth Park on Aug. 15 in his most recent start. Excession’s last race was the Rebel Stakes (G2) on March 14, when he finished second to Nadal at odds of 82-1.

“He needed some time after the Rebel,” said Asmussen. “He’s been working well recently. His race against Nadal was very impressive. Just a weird year that allowed him to take a break and come back.”

Max Player, formerly trained by Linda Rice and sent to Asmussen before the Derby, finished fifth in the Derby, and third in his two starts – the Belmont and the Travers (G1). His most recent workout – 5 furlongs in 1:00.20 – made the Preakness decision as easy one.

“He’s an extremely impressive horse and I think he’s doing really well,” said Asmussen. “His work Monday was excellent. His gallop-out was huge. He came out of it in very good shape, went back to the track with a whole lot of energy. Very exciting horse at the right time.”

Mr. Big News worked 4 furlongs in 50.40 seconds at Churchill Downs on Friday, his final breeze before the Preakness. The Bret Calhoun-trainee ran third in the Derby at 46-1 odds.

“It was just a maintenance work,’’ said Calhoun. “If he’s not ready by now, he never will be. We weren’t looking for much, just wanted him to stretch his legs a little bit. That’s pretty much what we got. He’s been strong in his gallops every day.”

So does Tiz the Law, but not for the Preakness

Belmont and Travers winner Tiz the Law had his first breeze since finishing second in the Derby, working 4 furlongs in 50.07 seconds at Belmont Park under Heather Smullen

“It was a nice, easy work,” said trainer Barclay Tagg said. “I wasn’t looking for much. I just wanted him to go out there and stretch his legs. He hadn’t done anything in three weeks.”

With no Triple Crown on the line, Tiz the Law is skipping the Preakness and training up to the $6 million Breeders’ Cup Classic at Keeneland on Nov. 7.