After lots of last-minute decisions, the 145th Preakness (G1) is set – a field of 11 was entered Monday with Kentucky Derby winner Authentic the morning-line 9-5 favorite leaving from post No. 9. 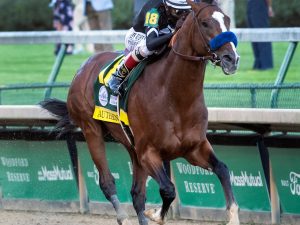 Trained by Hall of Famer Bob Baffert, Authentic has won five of six career starts, and put in his final workout – 4 furlongs in 47.60 seconds — earlier Monday at Churchill Downs. Hall of Famer John Velazquez, now a three-time Derby winner, will be aboard looking for his first Preakness win.

Baffert, meanwhile, is looking for a record-setting eighth Preakness win.

Baffert’s other entry for Saturday’s Preakness is Thousand Words, listed as the co-third choice at 6-1 along with the filly Swiss Skydiver – the first female in the field since Ria Antonio ran 10th in 2014.

Rachel Alexandra in 2009 was the most recent of five fillies to win the Preakness. Swiss Skydiver, trained by Kenny McPeek, will be ridden by Robby Albarado and leave from the No. 4 post. McPeek decided Sunday to enter the filly.

Art Collector, who defeated Swiss Skydiver in the Blue Grass (G2), is the second choice at 5-2. Trained by Tommy Drury, Art Collector is 4-0 this year but missed the Derby with a minor foot injury.

As for Swiss Skydiver taking on the boys again, McPeek said Sunday, “I know she will make the distance without any problem. I think she will like that racetrack. Of course, she has raced everywhere. Whatever racetrack she has raced over she has handled great.”

The Preakness is the final leg of the Triple Crown this year due to the coronavirus pandemic that reshuffled the racing schedule: the Belmont Stakes (G1) became the first leg instead of the last and was won by Tiz the Law on June 20; and the Derby was run on Sept. 5 rather than the first Saturday in May.

No spectators will be at Pimlico Race Course, usually jammed with 130,000 fans, and only essential personnel, including employees, jockeys, trainers and owners will be at the track. Strict safety and health protocols will be in place.

Ny Traffic, trained by Saffie Joseph, Jr., was a last-minute entry as well, while several other 3-year-old contenders, including Tiz the Law, were not entered.

Authentic and Thousand Words, a late scratch from the Derby after flipping on his side during saddling in the paddock, are scheduled to arrive in Baltimore on Tuesday, along with most of the rest of the field.

A year ago, Baffert sent out 5-2 favorite Improbable, who finished sixth behind winner War of Wil.

Baffert has a remarkable record in the Preakness. He’s won it seven times in the 18 years he’s had one or more horses in the race. His previous winners are Silver Charm, Real Quiet, War Emblem, Point Given, Lookin at Lucky, American Pharoah and Justify – the last two going on to win the Triple Crown.

Because of late decision making whether to enter, and along with health restrictions that include jockey quarantines, many of the nation’s leading riders are not in the Preakness. Among them are brothers Irad and Jose Ortiz, Joel Rosario, Javier Castellano, Julien Leparoux, and Tyler Gaffalione.

That gives several local riders a chance to get a leg up in the Preakness. Among them are Sheldon Russell, who will be aboard Excession; Jevian Toledo aboard Jesus’ Team; Trevor McCarthy on Liveyourbeastlife; and Horatio Karamanos aboard Ny Traffic.