A little rain didn’t seem to dampen the spirits of humans or thoroughbreds during the long-awaited return of racing in New York on June 3 (Wednesday). 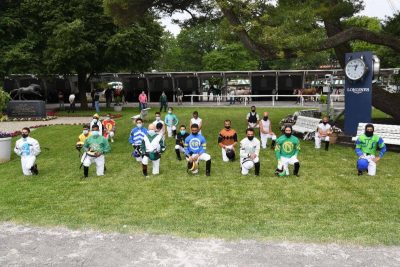 Without spectators at Belmont Park, and with essential personnel wearing masks and following safety protocols brought on by the coronavirus pandemic, the first race went off at 1:21 p.m. ET. Star of the West ($4.90) pulled away in the stretch for a 5 ½-length victory in a 6 ½-furlong maiden claimer for trainer Rudy Rodriguez.

Two races later, even-money favorite Fauci (the horse) gave way to Prisoner in the stretch and ran second in a 5-furlong race for maidens. The colts battled throughout until the top of the lane when Prisoner ($4.70) broke away for a 4 ¾-length win.

John Imbriale, now NYRA’s No. 1 race-caller, captured the end of the race this way: “Prisoner has opened up … Prisoner will win his debut going away … Prisoner took no prisoners today.”

Fauci is named for Dr. Anthony Fauci, director of the National Institute of Allergy and Infectious Diseases (NIAID) and the voice of reason in advising the United States on ways to stay safe as part of the White House Coronavirus Task Force.

The opening race was the first on the New York Racing Association circuit since March 15 at Aqueduct. A day later, racing was suspended due to COVID-19.

The winning rider aboard Star of the West was Reylu Gutierrez, who has remained in New York through the shutdown working horses.

“I stayed here throughout the pandemic. I stayed working. I was galloping, jogging and breezing horses,’’ the jockey said in a NYRA press release. “Whatever it takes to earn my place here at NYRA. Winning the first race back means the world. I’m just battling to earn my place here. I shed a little tear after the wire because it really does mean a lot to me.” 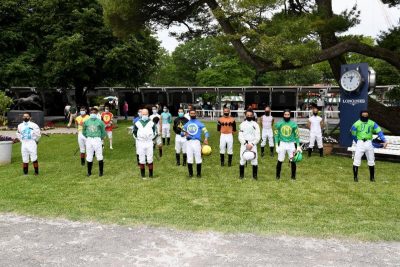 Before the first race, jockeys stood in the paddock for a moment of silence in honor of those lost to COVID-19 and to pay tribute to medical professionals, first responders and front-line workers. The jockeys then took a knee in solidarity with peaceful protesters across the country.

“There’s a lot going on in the world right now and we wanted to show respect to all causes, and to all people, and to show that we here at NYRA support everybody,” Gutierrez said. “Horse racing, in general, supports all ethnicities. Horse racing is a worldwide sport and it doesn’t matter what color you are, what religion you are, or what ethnicity you are. What matters in horse racing is that we are one. Here at NYRA, we have people from everywhere and fans from everywhere.”

Later in the day, who else but Eclipse Award-winning trainer Chad Brown saddled the winner of the feature, with front-running Rushing Fall ($3.70) easily holding off Got Stormy and beating Call Me Love by two lengths in the $100,000 Beaugay Stakes (G3).

The 5-year-old mare owned by e Five Racing Thoroughbreds was ridden by Javier Castellano and covered the 1 1/16 miles on the turf in 1:40.71 in her first race of the year. A four-time Grade 1 winner, Rushing Fall improved to 12-9-2-0 with earnings of more than $2 million.

“I’m so happy to be here. I’ve been through a rough time these past couple months with quarantine for the COVID-19. It was pretty rough,’’ Castellano said. “Thank God we’re home.”

Got Stormy, trained by new racing Hall of Famer Mark Casse, faded to fourth (of five) in the stretch.

Irad Ortiz, Jr., winner of the past two Eclipse Awards as the nation’s outstanding jockey, won five of the 10 races on Belmont’s opening day card – the third aboard Prisoner, the fifth aboard Strongerthanuknow ($4.70), the sixth aboard Madita ($9.90), the eighth aboard Value Proposition ($11.20) and the 10th aboard In the Loop ($4.60).

“We are proud to be able to usher in the return of professional sports to New York right here at Belmont Park,” NYRA President & CEO Dave O’Rourke said in a statement. “I would like to thank racing fans for tuning in and supporting live racing. Opening Day brought us a number of touching and exciting moments and we look forward to many more great days of racing ahead.”