One Last Hurrah Before Arlington Rides Off Into the Sunset

Arlington International Racecourse looks to be in the final furlong of its final season, closing the books on a history of thoroughbred racing in the far northwest suburbs of Chicago.

Before it disappears, the track has one final summer season to finish, and one final stakes racing blow-out to host before it rides off into the sunset. That final stakes blowout happens Saturday (Aug. 14), when the track hosts eight stakes races including four graded stakes with total purses reaching $1.8 million topped by the Grade 1 $600,000 Mister D. Stakes (formerly the Arlington Million).

Arlington hosted the world’s first $1 million horse race, the 1981 Million, and the track burned to the ground on July 31, 1985, before being rebuilt and reopened as a new world-class facility four years later. Now owned by Churchill Downs, Inc., the track is for sale and the land has already attracted multiple offers for redevelopment, including one from the Chicago Bears.

When the current racing season ends on Sept. 25, Arlington, which first opened in 1927, is expected to shut its doors forever. The track has not applied for 2022 racing dates.

In addition to the Mister D. (named for former Arlington owner Richard Duchossois), the race card will also include the $400,000 Beverly D. (G1) for fillies and mares, the $300,000 Bruce D. (G1) for 3-year-olds, the Pucker Up (G3) for 3-year-old fillies, plus a quartet of ungraded stakes, the Black Tie Affair, the Addison Cammack, the Mike Spellman Memorial, and the Isaac Murphy.

The Mister D. may not be a million-dollar race anymore, but that doesn’t mean it won’t be a major race on the annual list of important turf stakes. At 1 ¼ miles, the Million/Mister D. always provides a viable distance alternative to Saratoga’s 1 ½-mile Sword Dancer, which is run at roughly the same time for horses in the same division.

Trainer Chad Brown has won the last three editions of the Million/Mister D., including in 2019 with Horse of the Year Bricks and Mortar.

This year, Brown will send out the favorite once again with Domestic Spending, a three-time Grade 1 winner who comes into the race on a four-race winning streak including the Saratoga Derby and Hollywood Derby (G1) in the second half of 2020, and the Turf Classic (G1) and the Manhattan (G1) in the first half of 2021. The Manhattan victory was a tour-de-force effort at 1 ¼ miles with a big speed figure that towers over the recent efforts of the others in this field and will make Domestic Spending the horse to beat.

The top challenge to Domestic Spending is likely to come from two-time Arlington Million-winning trainer Aidan O’Brien, who entered multiple Group stakes winner Armory, who will be in search of his first G1 victory. His most recent Group 1 outing came two races ago when he was third in the Prince of Wales’s Stakes at Ascot at this distance, and the race before that was a victory in the Melodi Media Huxley Stakes (G2) where the horse earned a sizeable Timeform figure that indicates this horse will a major contender to win. Ryan Moore, who rode the Huxley win, is crossing the pond for the mount. 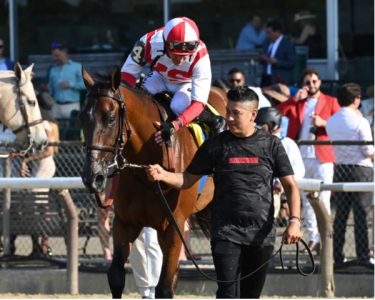 Bizzee Channel exits a win in the local prep for this, the Arlington Stakes (G3), and goes out for perennial Arlington leading trainer Larry Rivelli, who has never won, or even entered a horse in the Arlington Million. He’ll be in a bit tough versus these. Another horse that should attract some attention on the tote board yet seems to be in too tough of a spot is European invader Space Traveller for trainer Brendan Walsh. Space Traveller’s best races are a couple years behind him, and the 1 ¼-mile distance of the Mister D. looks like it’s a furlong or two beyond his wheelhouse.

If there is a horse capable of upsetting the obvious Domestic Spending/Armory exacta box, it’s Zulu Alpha, who lost to others in this race last time out in the Arlington Stakes, but needed that race off a long layoff and was just prepping with an eye on the Mister D. He has plenty of back class, including a win in the 2020 Pegasus World Cup Turf Invitational, and he could be a factor if able to rediscover his best form for red-hot trainer Mike Maker with Luis Saez in from Saratoga for the mount.

The female counterpart of Arlington Million Day has always been the Beverly D., which is an important 1 3/16-mile Grade 1 fixture and will be again despite a decreased purse to $400,000.

The headliner is multiple graded stakes winner Mean Mary, who is 2-for-2 to start 2021 with wins in the Gallorette (G3) at Pimlico and the New York (G2) at Belmont. She will be challenged by a strong field led by trainer Aidan O’Brien’s winner of the Belmont Oaks (G1), Santa Barbara. Others in the field will include Naval Laughter, Bramble Queen, Lemista, and Joy Epifora.

On paper, the Beverly D. horse to beat may be Mean Mary, with Luis Saez riding for trainer Graham Motion. Nevertheless, the horse that is probably worth your bet is Lemista, trained by Chad Brown. While Brown has earned plenty of headlines in the Arlington Million, it’s the Beverly D. in which he has dominated with five consecutive wins and six overall. Lemista exits a disappointing effort in Saratoga’s Diana (G1), but before that ran a very good second with a 100 Beyer speed figure in the Beaugay (G3). Flavien Prat is in for the mount on Lemista, and Prat has won 10 of 21 mounts (48%) riding for Brown the last two years.

Handicapping the Bruce D (formerly known as the Secretariat)

The day’s other Grade 1 is the Bruce D. Stakes (formerly the Secretariat), which had a lot of its thunder stolen by last week’s $1 million Saratoga Derby Invitational (G1) in the same division.

Therefore, the race unfortunately will not attract a true Grade 1 caliber field. The field is led by Larry Rivelli-trained King of Miami, who won the $150,000 Mystic Derby at Canterbury, and Tango Tango Tango, winner of the local prep in last month’s American Derby for trainer Jack Sisterson.

In a nine-horse field, a solid exacta box bet looks like King of Miami and Tango Tango Tango.