Horses for courses: It’s a universal angle that works better than most.

Exhibit A is Fourstardave, who won at least one race at Saratoga in eight consecutive years (1987-94). Maybe it was the water, maybe it was the air, but the New York-bred gelding turned into a different animal at the Spa.

Irishman Leo O’Brien, the father-in-law of John Velazquez, trained Fourstardave, who was 9-for-21 there, with six stakes wins. He was no world-beater, because he never won a Grade 1 or a Grade 2 at his happy place. 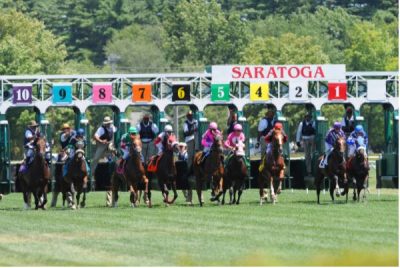 Fourstardave did most of his damage against New York-breds and in claiming races, handicaps and allowances, but this ‘people’s horse’ was beloved. After he was retired, the mayor of Saratoga Springs presented him with a chocolate key to the city, and there’s a small nearby lane called Fourstardave Way.

He earned the nickname “The Sultan of Saratoga,” and the Grade 3 Daryl’s Joy, a race he won twice, once in course-record time, was renamed in his honor.

He’s one of only three horses buried on the grounds of Saratoga, where his memory lives on in the Grade 1 Fourstardave Handicap, which tops Saturday’s card.

As you would expect, there’s a ton of speed in this field of 12 lightly raced 2-year-olds. The versatile Gunite (2), from the first crop of 2017 Horse of the Year Gun Runner, could be ready to take a big step forward for trainer Steve Asmussen. He broke his maiden in his third start last out after pressing a quick pace. The time before, he closed powerfully for second, zipping the final furlong in about 11 3/5 seconds, after a bad start. Roberto Santana, Jr., who’s been heating up, should be able to place him wherever he wants, and Gunite should be a decent price.

Another logical play is Todd Pletcher’s Double Thunder (7), who dominated the Grade 3 Bashford Manor at Churchill Downs. He overcame a troubled break and came from 10th early before he drew off by 4 3/4 lengths. His speed figures aren’t great, though, and he’ll probably be overbet. Stolen Base (6) broke his maiden first out at the Spa for Mike Maker, who’s bidding strongly for the meet title.

Raging Bull (1), the class of the field, is ideally positioned for a ground-saving trip under pathfinder Irad Ortiz, Jr. He’s won two Grade 1’s in the past year, was second and third in two others, and regularly posts final quarters of less than 24 seconds. He’s also posted four straight solid turf works for Chad Brown.

Irad should be able to stalk pacesetters Blowout and Whisper Not from midpack and make his winning move in upper stretch.