Monomoy Girl Is on Her Way to Greatness 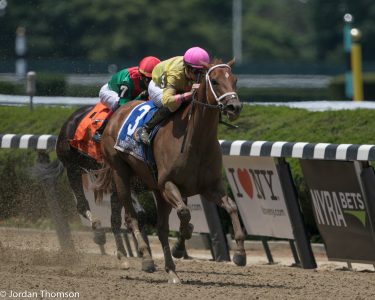 In all sports, greatness is defined in many different ways, often with championships. With the Breeders’ Cup World Championships just a mere three months away, this is the time of year where horse racing’s most talented horses begin to emerge on the road to the year-end Championships.

The daughter of Tapizar has shown her versatility with closing scores on the turf, front running wins on the dirt, as well as closing wins on the dirt. The Brad Cox-charge has shown she literally can do anything jockey Florent Geroux ask of her.  Her character was displayed in the Kentucky Oaks (G1) when she broke from the far outside post, looked a challenge in the eye from Wonder Gadot in the stretch, and fought back to score in the biggest race in the country for three year old fillies.

The thing that has amazed me about this little filly is the fact that if you look at her speed figures, she’s literally improved or maintained her speed every single race. Her Beyer speed figures read as such: 59, 70, 88, 91, 91, 95, 97, and 98. It’s incredible to see that type of consistent improvement without any regression in a horses form in nearly a year’s time span.

Monomoy Girl is searching for her fourth consecutive grade 1 win this Sunday in the Coaching Club  American Oaks (G1) at Saratoga. The “Graveyard of Champions” will offer a new challenge to the plucky Tapizar filly, but the competition will come from familiar foes. She’s beaten every filly entered in the field.

Her main challenge will come from Kentucky Oaks third place finisher Midnight Bisou. Midnight Bisou has moved to trainer Steve Asmussen’s barn since the Kentucky Oaks. She’s coming off an ultra-impressive performance with her win in the Mother Goose (G2) at Belmont Park.

She’ll also have to deal with Kentucky Oaks fourth place finisher Eskimo Kisses. Eskimo Kisses has found Monomoy Girl rather chilly, having not been within four lengths of her in the Kentucky Oaks at Churchill Downs or in the Ashland (G1) at Keeneland.

Monomoy Girl will break from post position four. She’ll only have Gio Game to her outside. Gio Game lacks the natural early speed of Monomoy Girl, so Florent Geroux should be able to dictate how the race unfolds. If Midnight Bisou and jockey, Mike Smith, or Gio Game and jockey, Julien Leparoux, decide to gun early, she can stalk from second or third; if the pace is slow, she can ration her speed out on the lead.

If Monomoy Girl continues her progression in the Coaching Club American Oaks, I see no other outcome than another impressive victory. She has the potential to become one of the sports’ all-time greats, and with the future of Justify’s career in question, the sport may need a star to take the reins.

She reminds me a lot of Beholder. Both of them are speedy, yet tactical. Beholder’s pedigree is modest, as is Monomoy Girl’s. Beholder is a daughter of Henny Hughes and Monomoy Girl’s dam-sire is Henny Hughes. Many experts had questions about both of these ladies’ ability to go a distance of ground. Beholder proved her greatness in the Pacific Classic (G1) and in both of her Breeders’ Cup Distaff (G1) wins. Monomoy Girl showed her class and liking for a distance of ground in the Kentucky Oaks. Granted, Monomoy Girl has much to accomplish to be mentioned in the same conversation with Beholder, but the talent is there, as is the versatility. If trainer Brad Cox so chooses, Monomoy Girl could even potentially win graded stakes on the turf. She’s just that good and that versatile.

Will Monomoy Girl go down as one of the sports all-time great females? It is too soon to say, she is well on her way to having a championship season, which could be capped off in Louisville on her home track of Churchill Downs in the Breeders’ Cup World Championships Distaff.

Scott has been around horse racing for 15 years. He’s currently partner relations manager and chief pedigree analyst for Derby Day Racing, where he also writes weekly blogs and offers handicapping selections. He’s covered racing in Indiana and all over the country for Horse Racing Nation since 2011. He’s been a horse owner and offered his expertise in purchasing racing stock for owners in the state of Indiana.