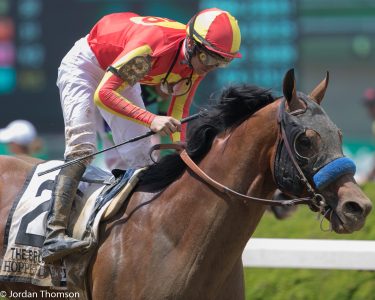 It used to be that the Suburban (GII) was a must-stop on the handicap campaigns of all of the best older East Coast stars — the last big race in New York for horses that carried weight before barns shipped north to Saratoga for the summer.

But in recent years, thanks in large part to the changing climate of the division, the Suburban has lost some of its luster. This year, however, with no clear handicap star, the Suburban is shaping up to be the East’s first real big test of older horses racing at a distance since the Pegasus World Cup in January. Eleven will go postward in the $700,000 event run under stakes conditions, including a classic winner and one of racing’s most beloved runners, who may be one of the richest and oldest horses still racing.

The Suburban is the last leg of the three-race series once known as the New York Handicap Triple, which also consisted of the Met Mile (GI) and Brooklyn Handicap. When the calendar allowed it, four horses swept the series, the most recent being Fit to Fight in 1984.

The wet weather from Friday is expected to dry out on Saturday and the temperatures will be cooler and in the upper 70s, but humid. The main track at Belmont Park is likely to be rated fast all day. The Suburban is the ninth race with a post time of 6:18 p.m. ET.

Calfornia-based Hoppertunity, ironically, has done a lot of his best running outside of the Golden State. He won the Brooklyn last out on Belmont Stakes Day and previously captured the 2016 Jockey Club Gold Cup (GI), as well as a couple of graded stakes at Churchill Downs. The earner of more than $4.6 million has won both starts over this track and while the 10 furlongs isn’t his best (he prefers nine, it seems), he can certainly handle this and is likely super-fit after his last.

He has maintained his ability to put up some really big speed, pace and class figures and, though he seems to be more of a later runner, he has some tactical ability and can be placed closer to the pace if need be. Regular jockey Flavien Prat returns and the now 7-year-old son of Any Given Saturday — currently the most seasoned in his division — seems to be about as good as he’s ever been. The Watson, Weitman and Pegram and Bob Baffert trainee breaks from post eight.

Good ol’ War Story has made more than $2.6 million the hard way, mostly winning smaller stakes and placing behind the superstars. But one thing about him is that he is pretty consistent. His fourth-place finish in last year’s Breeders’ Cup Classic (GI) is good enough to post the upset and while he’s never actually won at this distance, he ran a good second as the favorite to Hoppertunity at 1 ½ miles in the Brooklyn last out. He’s a logical choice for a spot on one’s exotics tickets. Hall of Famer Javier Castellano is a bonus for this 6-year-old gelded son of Northern Afleet. 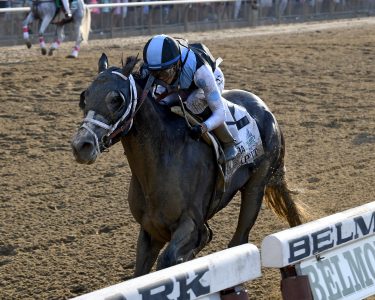 Last year’s Belmont Stakes hero Tapwrit is coming off a third in an optional claiming race after spending nine months on the shelf following a fourth in the Travers Stakes (GI) and trainer Todd Pletcher has indicated the $1.2 million son of Tapit is ready for the task.

Tapwrit clearly likes Belmont Park, the distance is in his wheelhouse and he’s been training exceptionally well over the track. It’s his second start back so he should be more fit than before, but will it be enough for a win? He has the talent to go with numbers to win and should have a decent pace to press in the early going. Regular jockey Jose Ortiz returns.

California shipper Dr. Dorr returns to action off a decent runner-up finish in the Gold Cup at Santa Anita (GI) at this distance, where he set all the pace before being run down by Accelerate in the lane. The Californian Stakes (GII) winner has the talent and ability to get the job done and will no doubt be either up setting the pace under Joe Talamo or sitting just off it. And if he shows the same form he did in his last win two back, he’s certainly a strong contender for another trip to the winner’s circle for trainer Bob Baffert’s wife, Jill.

It’s interesting to note the son of Lookin at Lucky was bred in partnership with the Bafferts, Jockey Club board member Madeleine Auerbach and the late actor Jack Klugman, who was a big-time racing owner/breeder/fan who owned Jacklin Klugman when that one finished third in the 1980 Kentucky Derby. Dr. Dorr may have been one of the last horses he bred. 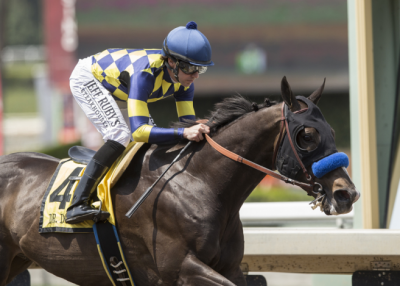 Grade 3 winner Discreet Lover seems to struggle in the upper graded stakes ranks and has yet to really show he can be competitive here.

Former claimer Zanotti hasn’t finished worse than second in his last 13 races and carries a four-race runner-up streak versus stakes competition into this race. He seems to like nine furlongs just fine and he’s bred for at least 10, so it’s safe to say he can handle the jump in distance; the jump in class remains the question.

Lightly raced Take Your Guns was a decent fourth in the Brooklyn last time out and likes Belmont, plus carries some solid connections in trainer Chad Brown, owner John Gunther and jockey Joel Rosario. If he’s improved at all off his last, he’s got a shot at the upset with a late stretch run.

New York-bred Diversify has done well in mostly restricted company, but his frontrunning Jockey Club Gold Cup (GI) win from last fall was spectacular and he’s dangerous if he gets out and loose on the lead.

Sorry Erik is a handy allowance/optional claiming horse in pretty deep, but we all know to not leave a Keith Desormaux-trained runner out of exotic tickets in big races by now.

The Lieutenant ships in off a grade 3 win on the Golden Gate Fields Tapeta last out and while a very useful non-graded stakes/allowance type, he may have too much to do to best the better runners here.

Name Changer is coming off a nice win in a Delaware Park optional claiming affair and, though he tests the distance for the first time, he has a pedigree to suggest he can handle it. His issue is whether or not this class jump will be too much for him.