Whitmore makes his first start since a runner-up finish three weeks ago in the True North Stakes (GII) over this track. The Count Fleet Stakes (GIII) winner has had a bit of an up-and-down season this year after winning three graded stakes in 2017. While he’s been most successful at three-quarters of a mile, Whitmore has raced well around two turns, so Saturday’s seven furlongs shouldn’t be too much of a concern. He’s logged two workouts since his last and trainer Ron Moquett said Whitmore is in top form.

“He’s doing very well,” Moquett said. “He came back very happy out of the True North and has been working well [at Churchill]. He shipped into Belmont [Monday night] and I like him at seven-eighths. He’s finished second going a mile and sixteenth in the Rebel and third at a mile and an eighth in the Arkansas Derby, so his distance is whatever the pace will allow us to run. We’re taking things race by race starting Saturday, but we’ll looking forward to it.”

With Ricardo Santana, Jr. in the irons, Whitmore will leave from post 2. 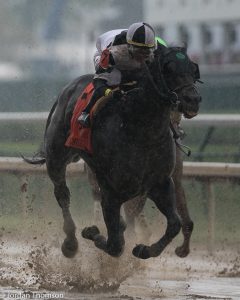 Looking to improve off a third-place finish in the June 9 Met Mile (GI) in his last start is Katherine Ball’s Limousine Liberal. This 6-year-old gelded son of Successful Appeal has earned one win from three starts this year, the most significant being the Churchill Downs Stakes (GII) on Kentucky Derby Day in which he came from off the pace to win by a head. While he’s accomplished at several sprint distances, he’s earned four wins from nine starts, with two seconds, at this seven-furlong distance and owns a good stalking style that should serve him well depending on how the speed sets up coming from his outside. Limousine Liberal and jockey Jose Ortiz will lead the field to post.

Trainer Chad Brown sends out Favorable Outcome for owner Klaravich Stables and the 4-year-old son of Flatter is coming off a second-place finish in an optional claiming race seven weeks ago, where he just couldn’t get past the frontrunning winner down the lane. Last year’s Swale Stakes winner (GIII) was third at this distance in last year’s Malibu Stakes (GI) at Santa Anita, but has struggled recently when jumping up into graded stakes company. He does have some decent figures, both in pace and speed, and he may be closer to the early pace than he’s been in his most recent stakes appearances. Hall of Famer Javier Castellano returns for the mount and the pair will break from post six.

Lightly raced Lewisfield is consistent and steps up in class and his numbers suggest his best could earn him a share.

Eye Luv Lulu returns to open stakes company off a win in the Affirmed Success for New York-breds more than two months ago and may be in tough.

Shaft of Light, who has had some success in the softer stakes races and was a strong second in the Salvatore Mile (GIII) last out, makes a jump in class in an attempt to qualify for his first Breeders’ Cup at age seven.

The Belmont Park Sprint Championship has been carded as the day’s seventh race with a post time of 5:11 p.m. ET. The race, as well as the other Stars and Stripes Festival events, will be shown live on NBC from 4:30-6 p.m. ET.