Life Is Good Kicks Off 2021 For Baffert in Sham Stakes 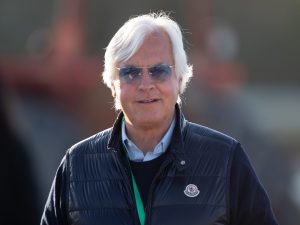 Ten days before his 68th birthday, Bob Baffert may have a better idea where his just-turned 3-year-old Life Is Good fits in on the road to the 2021 Kentucky Derby (G1).

Highly-touted Life Is Good headlines a field of five for Saturday’s $100,000 Sham Stakes (G3) at Santa Anita Park, a race that started Baffert-trained Authentic on his way to victory in the 2020 Derby and Breeders’ Cup Classic (G1).

Life Is Good sure gives Baffert a great deal of optimism heading into the two-turn, 1-mile Sham – his bay colt debuted with a 9 1/2-length romp at Del Mar on Nov. 22.

“I always like to see what they’re going to do going two turns,’’ Baffert said this week. “We know he’s got a lot of speed, he’s shown brilliance, but until they go two turns … I think he should handle it but I’ve got to see it myself.”

A year ago, Authentic won in his debut at Del Mar on Nov. 9, then won the Sham by 7 ¾ lengths.

Baffert, of course, was on a roller-coaster ride in the year of the COVID-19 pandemic. In addition to Authentic, he trained top horses including Gamine, Charlatan, Nadal, Improbable and Thousand Words. Four times, though, his horses failed post-race drug tests.

The Hall of Famer likely will have several other Derby prospects as the prep season continues, but for now Life Is Good tops ‘em all. He’ll also send out Medina Spirit in the Sham.

Life Is Good is the 2-5 morning-line favorite and will be ridden by Hall of Famer Mike Smith. Also entered are Waspirant, Parnelli, and Uncle Boogie.

The Sham is the second Derby points-qualifier over the weekend. The first comes Friday in the $150,000 Jerome Stakes at Aqueduct.

Each race has a Derby points dispersal of 10-4-2-1 to the first four finishers.

Swill, the 7-5 favorite, comes into the 1-mile Jerome off a fourth in the Kentucky Jockey Club (G2) on Nov. 28 for trainer Brad Cox. Previously, he broke his maiden in his third career start.

In 2020, a total of 15 Derby point-qualifiers were contested worldwide, with Cox-trainee Essential Quality the leader at 30 points. The colt won the Breeders’ Cup Juvenile (G1) on Nov. 6.

After these two weekend races, there are 25 more Derby preps worldwide –eight with a points structure of 100-40-20-10 for the first four finishers.

The Derby, which was run on Sept. 5 as the second leg of the Triple Crown due to the COVID-19 pandemic. This year’s race is set for its traditional spot on the first Saturday in May.