With a final surge to the wire, Kj Desparado took the lead with a few strides to go and edged Fdd Scout by a neck to win the $3 million All American Futurity (G1) at Ruidoso Downs on Sunday.

A quarter-horse Triple Crown was on the line in this one, but Jess Savin Candy, the winner of the first two legs, was never in contention and finished fourth in the nine-horse field. 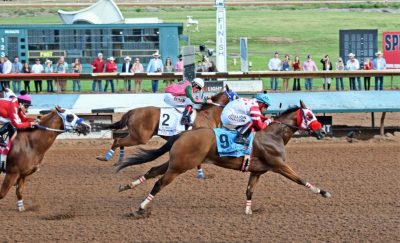 The victory by Kj Desparado gave owners John and Kathy Lee and partner Ruben Mares, trainer Wes Giles, and rider Adrian Ramos their first win in quarter-horse racing’s premier race on the final day of the meet at the New Mexico track.

“I remember in the springtime Adrian assured me that this was the kind of horse that could win the All American and it turned out to be true,” Giles said. “Right now, I just feel blessed to have this horse in my barn and to be associated with the owners who made this possible.”

Kj Desparado was third at the start, with Fdd Scout in the lead until the final two-to-three strides before Kj Desparado moved in front.

“It was a hard-fought win,” Ramos said. “I had faith in my horse from the start. He has been strong all season and finally put it all together today.”

Kate Eye Kylie bucked early in the race, and jockey Ramon Sanchez was sent sprawling to the ground. There was no immediate medical report on Sanchez.