John Servis is looking for a “woo hoo’’ moment of his own when he sends out Lucky Lee in the $1 million Blue Grass Stakes (GII) at Keeneland in one of three major prep races for the Kentucky Derby (GI) at Churchill Downs on May 4.

Certainly, the colt Servis trains will be a long shot in what looks to be a full, wide-open field of 14 3-year-olds. Among the likely favorites are Kentucky Jockey Club (GII) winner Signalman, looking to rebound from a seventh-place finish in the Fountain of Youth (GII) at Gulfstream Park last month, and Win Win Win, third in the Tampa Bay Derby (GII) on March 9.

So far, the Road to the Kentucky Derby has a taken some surprising twists this season, with the likes of By My Standards winning the $1 million Louisiana Derby (GII) at odds of 22-1, Maximum Security taking the $1 million Florida Derby over favorites Hidden Scroll and Code of Honor and top early Derby contenders Game Winner and Improbable, getting beat in divisions of the Rebel Stakes (GII) at Oaklawn Park.

Servis, of course, is well aware of what can happen to one’s Derby fortunes in just under two minutes. Back in 2004, he saddled the fan favorite Smarty Jones to victories in the Derby and the Preakness (GI) before coming up short in the Belmont Stakes (GI) in his Triple Crown bid. So, a week ago, when his brother Jason pulled off a surprise he didn’t expect — his Maximum Security, who could have been claimed for $16,000 earlier in December — won the Florida Derby, a series of texts began.

“Whenever we win a big race,’’ John Servis said the other day, “my mother and sister will call or text us, and just say ‘woo hoo.’ That’s the extent of it. I knew I couldn’t call Jason last week right after the race because things were so crazy, so I just texted: ‘woo hoo.’” 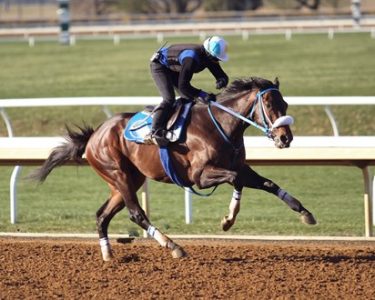 And just like that, Jason Servis has one of the top Derby contenders heading to Churchill Downs in undefeated Maximum Security (100 points). Now, John wants his chance to join his brother in Louisville with Lucky Lee, a bay son of Flatter, hopefully back in top form after a seventh-place finish in the Withers (G3) at Aqueduct on Feb. 2.

“I was high on him from the get-go,’’ said Servis of the colt owned by Cash is King LLC and Leonard C. Green. “We were pointing for the Withers to test the waters against tougher competition, but we found a neck issue that took us a while to figure out.’’

Lucky Lee was sent back to Palm Meadows Training Center in Florida, and seems to have come around. The colt worked 4 furlongs in 49 seconds at Keeneland on March 31.

Servis chose the Blue Grass because the race seems like it’s a wide-open affair, with no real standout in the field. Servis figures it’s worth trying to collect the Derby points necessary to qualify to Run for the Roses. A first- or second-place finish would do the trick.

“He’s going to have to be awfully impressive (to go forward to the Derby),’’ said Servis. “If he wins and he’s all out doing it, we don’t want to kill him just to get to the Derby. He’ll run all day long, so we were thinking the Lexington (GII) and then Belmont (at 1 ½ miles) would be great for him. But after that last work, we feel he deserves a chance to see if he’s as good as these other 3-year-olds.”

Lucky Lee will be ridden by Chris Landeros.

While John has experienced the thrill of winning the Derby with Smarty Jones, Jason’s first taste of the Derby came last year, when Firenze Fire ran 11th.

John Servis has been at this game a bit longer than Jason, although both grew up in a racing household in West Virginia, with Dad being a jockey. John began training in 1984, has sent out more than 10,000 starters with more than 1,770 winners and $58 million in career earnings; Jason, who wanted to be a jockey but was too big, began his training career in 2001 and has over 1,150 winners     from more than 4,700 starters.

Asked whether he has any Derby advice for his brother, John said: “He doesn’t need any advice from me.”

A couple of more “woo hoos’’ popping up on the phone over the next few weeks would do nicely, though.