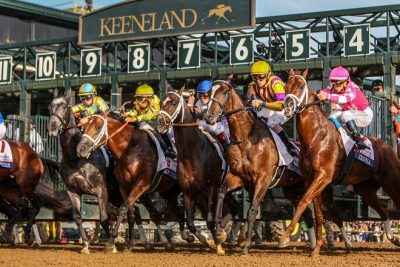 Keeneland’s highly anticipated spring racing season gets underway on a Thursday this year — the first Thursday opening in 60 years — and over the course of the historic 16-day season daily purses will average a record of $768,500 making the Lexington, Kentucky, oval a must-stop for many of the country’s top horses and their connections.

Overall, a total 18 stakes worth a record $4.6 million in purses will be offered, including two additions to the calendar, with at least one scheduled nearly every day.

As is tradition, Keeneland will be dark on Easter Sunday (April 21).

Because this year opening day is on a Thursday, Lexington Mayor Linda Gorton has proclaimed it to be “Keeneland Day in the Bluegrass.”

Topping the meet are the big Kentucky Derby and Kentucky Oaks preps, the 95th running of the $1 million Toyota Blue Grass Stakes (GII) and the $500,000 Central Bank Ashland Stakes (GI) respectively, both set for this Saturday, April 6. However, the opening weekend graded stakes action gets underway on Friday with the $150,000 Kentucky Utilities Transylvania Stakes (GIIT), a 1 1/16-mile turf race for 3-year-olds.

The Blue Grass will be televised by NBC Sports, along with the Wood Memorial Presented by NYRA Bets (GII) and the Santa Anita Derby.

The four-day opening weekend stakes action wraps up on April 7 with two events for 3-year-old fillies — the $200,000 Appalachian Stakes Presented by Japan Racing Association (GIIT) at one mile on turf, and the $150,000 Beaumont Stakes Presented by Keeneland Select (GII), which will be contested at seven furlongs and 184 feet on dirt.

For the remainder of the spring meet, racing will be held Wednesday through Sunday, except on Easter.

The second Saturday of racing, April 13, is another stakes action-packed day, which features the $350,000 Coolmore Jenny Wiley Stakes (GIT), a 1 1/16-mile race for fillies and mares on the turf, and the $200,000 Stonestreet Lexington Stakes (GII) for 3-year-olds at 1 1/16 miles. The Lexington is one of the final two preps on the Road to the Kentucky Derby and offers qualifying points to make the gate for the Run for the Roses on a 20-8-4-2 basis to the top four finishers.

The 2019 spring meet will include the April 2-Year-Olds in Training Sale, to be held on Tuesday, April 9. Preview Day is scheduled for April 8.

Keeneland will be offering the following wagers:

All other wagers, unless noted, have a $2 minimum.