In his master work, “Winning at the Races: Computer Discoveries in Thoroughbred Handicapping,” William Quirin called early speed the “universal bias”. And although its importance has diminished over the years with the advent of turf and synthetic surfaces, there is little doubt that the ability to contest the pace still is — and will continue to be — a valued commodity in thoroughbred racing.

Nowhere is this more evident than in America’s greatest race — the Kentucky Derby.

Over the past 20 years, the early speed rations (ESRs) of Derby winners have decreased (gotten faster) by about five lengths compared to the previous two decades and the average Dosage Index (a measurement of stamina) has increased (gotten worse) by nearly 25 percent. So, although wire-to-wire winners of America’s most famous race have become a rarity — just six (12 percent) over the past 50 years compared to 14 (28 percent) during the previous half-century — it’s clear the Run for the Roses still puts a premium on early foot, or at least the ability to show early foot .

In his aforementioned book, Quirin details a simple, yet effective, way to assess this ability (for a full explanation of his method, click HERE).

Quirin assigns each horse 0-8 points. Horses with zero points are those that typically lag in the back half of the field at the first call, whereas horses with eight points are generally on or near the pace.

A 2001 study by Ken Massa of Handicapping Technology & Research demonstrated how meaningful Quirin’s speed points are. Massa’s survey showed that, in non-maiden dirt routes on a dry track, horses with 6-8 Quirin speed points greatly outperformed expectations, with a median impact value of 1.26 and a median return on investment of -11 percent.

Horses with 0-2 Quirin speed points, on the other hand, produced a median IV of just 0.92 and a median ROI of -20 percent.

My own study of the Kentucky Derby from 1992-2018 produced similar results — with one notable exception:

Confirmed frontrunners, i.e. horses with eight Quirin speed points, have greatly underperformed at Churchill Downs — something that trainers Todd Pletcher and Bob Baffert seemed acutely aware of when they elected to have their speedy charges Super Saver (2010) and American Pharoah (2015), respectively, come off the pace in their final preps. 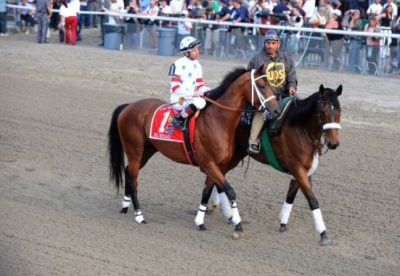 Since 1992, horses with eight Quirin speed points are 1-for-59 in the Kentucky Derby. Only Big Brown in 2008 was able to take home the roses — and he did so by coming off the pace. Still, those meager stats pale in comparison to the 0-for-92 mark that horses with 0-2 Quirin speed points have accumulated over the past 27 years in Louisville.

Horses that recorded a positive ESR in their final Derby prep haven’t performed much better. Only Sea Hero (1993), Thunder Gulch (1995) and Street Sense (2007) posed for pictures in the Churchill Downs winner’s circle after earning an ESR of +1 or greater immediately prior to the Most Exciting Two Minutes in Sports.

And only Grindstone (1996) wore the roses after trailing by 7 ½ lengths or more at the first call of his final prep.

Conversely, horses that weren’t leading, but were within three lengths of the lead, at the first call in their last Derby prep have produced a 16.2 percent ROI since 1992.