Ran a solid second, beaten three lengths, May 2 in the split Arkansas Derby (G1) behind Bob Baffert’s Nadal, who at the time was rated up there with Tiz the Law.

The problem is that King Guillermo hasn’t run since, and winning the Kentucky Derby (G1) off a four-month layoff would be a monumental achievement.

The colt, owned by former major-leaguer Victor Martinez, has talent, but going in without a prep makes him an automatic throw out for me.

Nonetheless, he’s been thriving since he arrived at Churchill Downs, working 5 furlongs under 1:00 in his previous two drills. Most recently, he covered the distance in 58.20 seconds on Aug. 22, fastest of 40 at the distance.

“I think he’s really enjoying being in Kentucky,” trainer Juan Avila said recently. “We’re very happy with how he’s taken to the track and his workouts the last two weeks.” 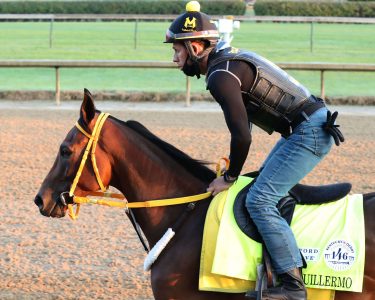 Notes: One of the better Derby stories, with a colt owned by a former MLB star and coming into the race after a fourth-month layoff … Won the Tampa Bay Derby prior to his runner-up finish in a division of the Arkansas Derby … Avila emigrated to the U.S from Venezuela in 2018, and King Guillermo is his best horse … Will be first Derby the colt’s connections – Avila, jockey Samy Camacho, and owner Victor Martinez, a five-time All-Star who played for the Cleveland Indians, Boston Red Sox, and Detroit Tigers in a 17-year career ending in 2018.