Make that a field of 16 for Saturday’s 146th running of a Kentucky Derby (G1) like no other.

Finnick the Fierce, the one-eye gelding, was scratched from the Run for the Roses on Friday because the owner didn’t want to take any chances with a horse that typically “carries himself a little funny.” He lost his right eye as a foal.

Arnaldo Monge, a veterinarian, owns Finnick the Fierce with Rey Hernandez, who is also the trainer. 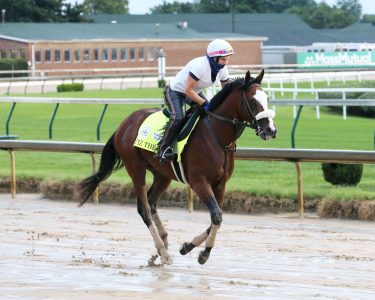 Monge said official vets had been watching the gelding this week but the owners simply made the choice not to run.

“Because he’s blind on the right eye, he carries himself a little funny,” Monge said. “And we always knew that. But ever since he arrived, the vets have been keeping an eye on the horse and I’m telling Rey ‘well, they’re concerned about this’ and there might be a legitimate reason but a regular vet doesn’t seem to think so.”

Finnick the Fierce (50-1) drew the No. 1 post, meaning the rest of the field is on his right side which could be problematic. He was seventh in the Blue Grass (G2) and galloped Friday at Churchill Downs.

The Derby will be run without spectators due to COVID-19, and is being contested four months later than usual. It’s also the second leg of the Triple Crown rather than the first; the Belmont Stakes (G1), historically the final leg, was the first leg, and was won by Derby favorite Tiz the Law.

Monge added: “We made the decision (to scratch) because we don’t want to go tomorrow and we’re all excited and then he gets scratched at the post. So we always said this is a horse for the long term.”

More tests will be given in the future, and the hope is Finnick the Fierce could show up for the Preakness (G1) on Oct. 5.

With the field at 16, the new 20-horse starting gate will have the first gate empty as well as the outside three gates.

Baffert gets better feel for his Derby colts 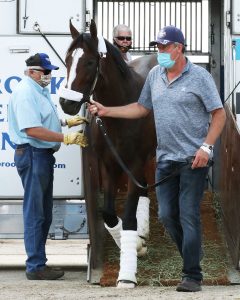 Both were taken out for gallops around Churchill Downs. Authentic (8-1) is 4-for-5 and comes into the Derby off a narrow win in the Haskell (G1). Thousand Words (15-1) won the Shared Belief in his previous start.

On Authentic: “In the Haskell it looked like it he was going to be coming up short but a lot of it was he just shut it down early. But he’s training really well, he’s coming up to the race in great shape. He’s the kind of horse where he looks around like in the stretch, I told (jockey) Johnny (Velazquez) if we’re lucky and we turn for home and he’s right there you have to keep him busy because he does check things out.”

On Thousand Words: “He’s a horse who can be a little bit tough mentally. But all of the sudden he started doing really well. He’s a horse where he’s getting closer, his numbers are getting tougher and tougher. But everything has to go right for him. He’s that kind of horse.”

As for the Derby favorite, Tiz the Law went for a leisurely gallop on Friday. The colt trained by Barclay Tagg has won six of seven starts by staying close to the pace and making his run at the top of the stretch.

“I’d like for us to be laying third all the way around until we get down for business,” Tagg said. “I’m very confident in our horse. He’s a very nice colt. I hope he wins it. He’s a good horse, good horses do good things.”