The Arnaud Delacour-trained daughter of Galileo is the 5-2 choice on the morning line and will have Javier Castellano back in the saddle. 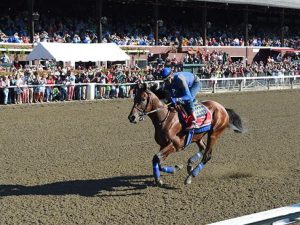 The QE II was first contested in 1984 and named in honor of Her Majesty The Queen Elizabeth II, who attended the races at Keeneland while on a visit to central Kentucky and the local horse farms in the area. The monarch presented the trophy to the winning connections that year.

The Keeneland fall turf feature received graded status in 1986 and has been a Grade 1 since 1991. And while it hasn’t been necessarily a key prep for the Breeders’ Cup Filly & Mare Turf (G1), it has produced a significant number of starters for the race, as well as year-end championships in female turf divisions. A year ago, Cambier Parc was victorious, though she skipped the Breeders’ Cup, and joined a list of amazing past winners, such as Together, Vacare, Ticker Tape, Riskaverse, Affluent, Ryafan, La Guerriere and Plenty of Grace. Both Perfect Sting and Dayatthespa won this race en route to a Breeders’ Cup win and Eclipse Awards at the end of the year.

It’s likely to rain on Saturday thanks to Hurricane Delta, so prepare for a very soft turf course and a wet main Keeneland track, though the temperature will be warm and in the lower 70s. 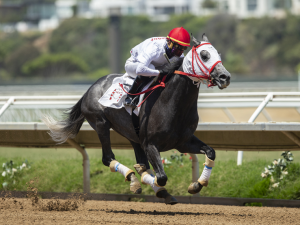 Lucky Seven Stable’s Opening Verse Stakes winner Crafty Daddy and Grade 2 winner Mr. Freeze are among the 10 runners set to contest Saturday’s Fayette Stakes (G2) at Keenland. The 1 1/8-mile main track test carries a purse of $200,000 and will be run for the 63rd time this year.

The Fayette Stakes is named for Fayette County, Kentucky, of which the city of Lexington is located. Title sponsor Haygard is the world-renowned equine hospital, where the Davidson Surgery and McGee Medical Centers (formerly the Haygard-Davidson-McGee Equine Clinic) are based.

Jim Bakke and Gerald Isbister’s Mr Freeze was second in this race last year yet hasn’t won a race in three starts since the Gulfstream Park Mile (G2) in late February. He is coming off a sixth-place finish in the Alysheba (G2) on Sept. 4 at Churchill Downs. Dale Romans trains the son of To Honor and Serve, who will be ridden by Javier Castellano.

Crafty Daddy had a productive turf career up until the Opening Verse at Churchill Downs was moved to the main track due to weather. So now trainer Kenny McPeek has put the gelded son of Scat Daddy back in a dirt race hoping for a repeat victory. Brian Hernandez Jr. Will be back aboard on Saturday.