Is a Grade 1 in the Cards for Tacitus in the Jockey Club Gold Cup?

So many opportunities for horses to earn a free pass to the Breeders’ Cup. So few takers willing to step up to the plate, an unfortunate development for fans and handicappers.

There are four $250,000 Grade 1 stakes at Belmont Park on Saturday with the winner of each “Win and You’re In” qualifier guaranteed an automatic entry into the corresponding Grade 1 Breeders’ Cup race next month at Keeneland. 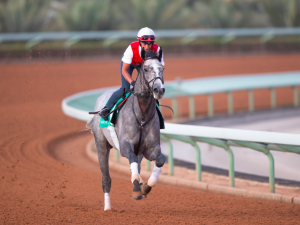 Even with that incentive, the action was very slow at the entry box on Wednesday with only 25 entrants spread over the four stakes.

The Jockey Club Gold Cup, the titular headliner, came up lightest of all with only five battling for a crack at the $6 million BC Classic on Nov. 7.

The Champagne, a gateway to the BC Juvenile, attracted only six runners. The two distaff events did slightly better with seven starters in each: the Frizette for 2-year-olds (the BC Juvenile Fillies) and the Flower Bowl for older grass runners (the BC Filly & Mare Turf).

Granted, it has been a long and challenging season as racing, like every other business, battled the coronavirus pandemic. We finally concluded the Triple Crown only last weekend. Maybe collective fatigue has finally set in. However, it would have been nice to see a greater show of enthusiasm in the runup to the Breeders’ Cup championships.

The often-disappointing Tacitus is the most accomplished runner in the Jockey Club Gold Cup with over $2.9 million in earnings. His four rivals have combined to bank only $1.1 million.

The gray 4-year-old is still looking for his first Grade 1 score. If it doesn’t happen here, he might never clear that hurdle.

Tacitus, trained by Hall of Famer Bill Mott, turned in another money-burning effort in his latest outing, finishing second to the front-running Global Campaign in the Woodward Handicap (G1) in a similar five-horse field as the 3-5 favorite.

It’s hard to envision Tacitus being off the pace in the JCGC. It sounds like the gray colt will be on the engine against this modest bunch. And you can read the tea leaves. Mott, a three-time JCGC winner, tightened the screws on Tacitus with a “bullet work” last Sunday, four furlongs in 47.20 seconds: the fastest move of 77 horses going that distance at Belmont.

It will be catch him, if you can.

You bets your money, and you takes your chances. Anyone who wants to back Tacitus again at a very short price is welcome to step right up to the nearest wagering window.

Tacitus was third in this race last year at 5-2. You won’t see anything close to that price on Saturday.

If you want to plumb for value, the improving Mystic Guide might be the best option. The 3-year-old Godolphin homebred captured the Jim Dandy Stakes (G2) at Saratoga and was held out of the Preakness to try this spot instead.

Happy Saver is another who bypassed the Preakness to run here, despite winning the Tesio Stakes at Pimlico. Name Changer, fourth in the Salvator Mile (G3) at Monmouth Park, and Prioritize, third in the Woodward behind Tacitus, complete the field.

In the Champagne, undefeated Jackie’s Warrior has been beautifully developed to this point by trainer Steve Asmussen. The three well-spaced victories have been a steady progression from a five-furlong maiden debut at Churchill Downs to the 6-furlong Saratoga Special (G2) on to the 7-furlong Hopeful (G1) also at Saratoga.

The son of Maclean’s Music smoothly and logically now stretches out to a one-turn mile which should fit his front-running style like a glove. His graded stakes experience and ever-improving speed figures make him the one to beat.

Reinvestment Risk, the Hopeful runner-up as the even-money choice, is back for another crack at Jackie’s Warrior. The Hopeful was only his second start and a good learning experience as he chased the loose-on-the-lead winner.

Asmussen takes a second shot here with Midnight Bourbon who has a win, a second and a third in three starts in Kentucky.

The Frizette, the one-mile filly companion event to the Champagne, gives Vequist an opportunity to demonstrate that the 9 1/2 length victory in the Spinaway (G1) at Saratoga wasn’t a fluke. Shipping to the Spa from Parx for trainer Butch Reid, Vequist prompted a blazing pace before taking charge and dusting the competition.

“She has to confirm it; anybody can do it once,” Reid said. “You have to do it a couple of times to really prove you belong at that level. But she jumped from 4 1/2 furlongs to seven-eighths and against Grade 1 company, so it was impressive, and I really liked the way she handled herself.”

Vequist has the rail, and faces a more demanding challenge from the undefeated Dayoutoftheoffice, upset winner of the Schuylerville (G3), California invader Get On the Bus for trainer Doug O’Neill and the duo of Cantata and Joy’s Rocket from the Asmussen barn.

Here is today’s pop quiz. As the Flower Bowl is a filly-and-mare grass stakes, who do you think trains three of the seven entrants? If you answered Chad Brown, you’ve clearly been paying attention.

It’s another festival of Chad as he saddles two-time Grade 1 winner Cambier Parc, My Sister Nat and Nay Lady Nay.

Civil Union, winner of three straight including the Glens Falls (G2), should provide the main competition for the Brown brigade.

The final Breeders’ Cup qualifier of the weekend at Belmont comes Sunday: the $100,000 Futurity Stakes (G3) for 2-year-olds on the grass with the winner advancing to the BC Juvenile Turf Sprint (G2).