Without a Triple Crown on the line, Belmont Stakes winner Tiz the Law will skip the Preakness on Oct. 3 and train up to the $6 million Breeders’ Cup Classic at Keeneland on Nov. 7.

The decision to pass on the Preakness – the final leg of the refashioned 2020 Triple Crown due to the COVID-19 pandemic – is not a surprise. Right after Tiz the Law finished second to Authentic in the Kentucky Derby (G1) on Sept. 5 – the second Triple Crown race after the Belmont on June 20 – trainer Barclay Tagg hinted as much.

On Tuesday, after the Belmont and Travers (G1) winner galloped 1 ½ miles at Belmont Park with Robin Smullen aboard, the news was made official. 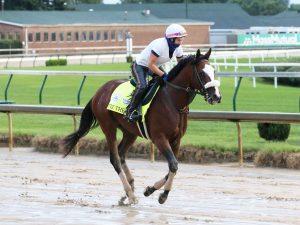 “Since we have no shot at winning the Triple Crown, our big goal with this colt is of course the Breeders’ Cup,” Tagg told Daily Racing Form’s Dave Grening. “We really want to go into the Breeders’ Cup with a fresh, happy horse. He came out of his last race a little stiff, no real physical problems, but a little stiffness. We’ve taken our time coming back with him. Now he seems just right.”

“Tiz the Law officially skipping #Preakness – Disappointing that Tiz will not be able to run in the Preakness, our primary interest is doing what’s right for the horse & in this case he’s not ready. We look forward to training him up to the Breeders Cup Classic on 11/7.” – Jack K.

Tagg also said Tiz the Law could have his first timed workout since the Derby on Saturday at Belmont Park, and would like to send the son of Constitution to Kentucky to get a workout or two over the Keeneland track before the BC Classic.

Tiz the Law, who dominated the 3-year-old division until his Derby defeat, has a good history of running off extended layoffs. He won the Florida Derby (G1) off eight weeks of rest, the Belmont off 12 weeks and the Travers off seven weeks. The time between the Derby and the BC Classic is nine weeks.

With Tiz the Law out of the Preakness, a decision should come shortly on whether the filly Swiss Skydiver will take on the boys or run in one of two races for females at Keeneland prior to the Breeders’ Cup. Trainer Ken McPeek said he was leaving his options open, and waiting for a decision regarding Tiz the Law.

Authentic put in a strong workout over the weekend in California, and the winner of 5-of-6 career races is expected to be the favorite for the 1 3/16-mile Preakness. Blue Grass (2) and Ellis Park Derby winner Art Collector is the likely second choice after missing the Derby with a minor foot injury.