Saratoga is the most important meet of the summer season for horseplayers. The highly anticipated 40-day Saratoga racing season lasts throughout the heart of the summer, running six days a week (every day except Tuesday) from Friday, July 20 until Labor Day, Monday, Sept. 3.

If you are a serious horseplayer and you are not already looking forward to the Saratoga meet, it might be time to check your pulse, because Saratoga is the summer place to be for all handicappers and horse racing aficionados alike.

Saratoga’s biggest day is, of course, Travers Day on Saturday, Aug. 25, which figures to the best day of racing and wagering of the entire summer. But at Saratoga, it’s not just about Travers Day — every day of the meet is like Christmas for handicappers. Large fields of well-meant horses guarantee complex handicapping puzzles each day of the meet. So, let’s look at some categories that handicappers can focus on to help narrow down the choices.

The first thing that should be mentioned in any Saratoga handicapping guide for 2018 is the trainer’s race. It is a safe bet that the top of the trainer’s standings will be dominated by Todd Pletcher and Chad Brown — or Chad Brown and Todd Pletcher. In fact, that might be the safest exacta box of the entire Saratoga meet.

Pletcher edged out Chad Brown on the final day of the meet last year to take the 2017 training title with a record-tying 40 victories to Brown’s 39. Brown had won the training title at Saratoga the year before when he set a record with 40 wins, finally getting over the hump after finishing second to Todd Pletcher in five consecutive seasons before that.

Brown accomplished his 40-win season in 2016 from 164 starters with a strong win percentage of 24 percent and a startling in-the-money (ITM) rate of 60 percent. Amazingly, Pletcher’s numbers were almost identical for 2017 when he won 40-of-165 for 24 percent wins and 56 percent ITM.

Once you understand, first and foremost, that Pletcher and Brown will dominate, you are ready to move on to some more in-depth angles. Here are five quick tips based on long-term trends that you can look for at Saratoga to help give you the edge over the betting public.

First off, in terms of a winning track profile at The Spa, Saratoga’s main track is speed-favoring at all distances, no doubt about it. The speed bias is especially prevalent in races at 6 furlongs and shorter, particularly with 2-year-olds. Early speed horses on or within a length of the lead at the first call win nearly 50 percent of all dirt sprints shorter than six furlongs. Pressers and the occasional stalker tend to win the rest. Speedsters and pressers also do exceptionally well at the commonly-run distance of six furlongs.

With the move to Saratoga, the focus in route racing flip-flops from benefiting one-turn route specialists at Belmont to favoring route horses that do their best running around two turns — and 1 1/8 miles — as opposed to 1 mile or 1 1/16 miles. Look down the past performances and bet horses whose best route races came on more traditional two-turn layouts such as Aqueduct, Monmouth, Churchill or in past races at Saratoga — but not at Belmont. This is particularly true if a horse has run past races around two turns at 1 1/8 miles (Saratoga cards no dirt races at 1 mile and 1 1/16 miles). Give these two-turn distance horses the edge against overbet horses that do their best running in Belmont’s one-turn route races.

3) Posts 1-3 are terrible in Spa turf sprints with more than 8 horses.

Downgrade the three inside posts in turf sprints, particularly the rail, while upgrading horses drawing far outside posts in those races. This is especially important in large fields with more than eight runners. Pass on betting the inside horses in Saratoga turf sprints and then take note of those horses and bet them back next time out — when and if they get off the inside post draw. 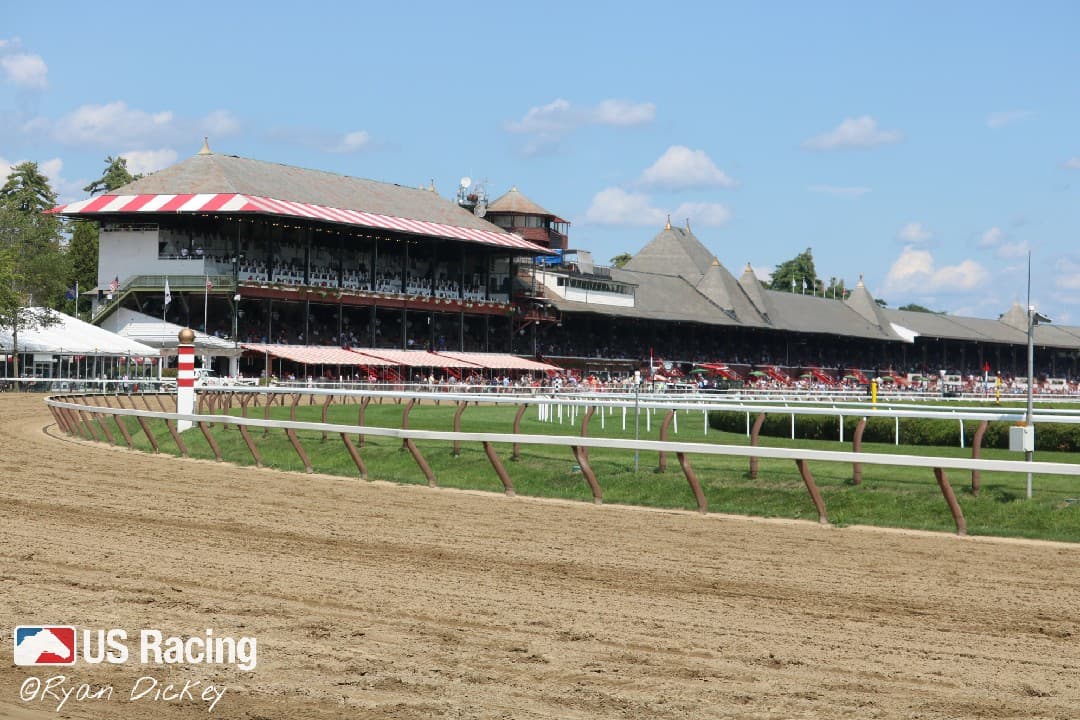 4) Outside posts are a big disadvantage in Saratoga turf routes.

Outside posts are negative factors on the Saratoga turf courses in routes to varying degrees. Posts 8 and outward are slight disadvantages on the turf at most distances, while far outside posts 10 and outward are usually poor bets. The inside three posts can offer a good advantage to horses running on the inner turf course at the distances of 1 mile and 1 1/16 miles.

In Saratoga grass races, speed generally plays a little better on the Mellon course than on the inner course. The pace profile of the average turf winner at Saratoga is a horse that is roughly four lengths off the pace at the first call and 2 1/2 lengths off the pace at the second call. Hold more strictly to this pace preference on the Mellon course, where deeper-closing winners happen less frequently than on the inner turf.

As a bonus, if you can get to the paddock for inner track turf races, look for physically small, athletic-looking horses instead of large, long-striding horses. The little guys handle the tight inner course turns nicely, while the big bulky horses generally don’t.

The summer at Saratoga is not only about the top two trainers, it’s also about seven weeks of top-notch betting and handicapping opportunities each and every day. The fields are huge, the competition is stiff and evenly-matched, and competitors come from almost everywhere. Races are loaded with good value for horseplayers who are willing to put in the effort.

Saratoga is the ideal meet for handicappers who follow track trends, because so many novice handicappers and tourists pump so much money into the pools. Opportunities always abound for serious horseplayers to get their share of the payoffs over the course of the seven-week meet.

I hope you can benefit from these Saratoga handicapping tips and use the information to your best advantage. Have a great time, and good luck!