Honor A.P. came sweeping around the final turn and rolled to an impressive 2 ¾-length victory over Authentic in the $400,000 Santa Anita Derby (G1) on Saturday at Santa Anita Park. 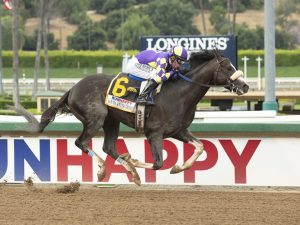 With no spectators at the iconic track due to the coronavirus pandemic, the top 3-year-old race for West Coast Triple Crown hopefuls turned into a showcase for the ridgling trained by John Shirreffs.

Honor A.P., in just his fourth career start, is a grandson of A.P. Indy, the 1992 Horse of the Year and a champion sire who died earlier this year at the age of 31. It seems fitting for Honor A.P. to continue to improve with each race. In his 3-year-old debut, he ran second to Authentic in the San Felipe Stakes (G2) on March 7.

“He ran great, it was a super effort,” Shirreffs said. “I’m just happy for everybody involved, and I can’t thank Mike Smith enough for all that he has done. Whatever I need, Mike, he’s always there for me … We knew that he has tactical speed and Mike can put him pretty much where he wants. On the backside, we hoped he would get comfortable and to have a nice kick in the end, and it all worked out well.”

In the revamped Triple Crown schedule, the Belmont Stakes (G1) is June 20 as the first leg, followed by the Kentucky Derby (G1) on Sept. 5 and the Preakness (G1) on Oct. 3.

What’s next for Honor A.P.?

“It’s up to him whether we run him again before the big dance,” Shirreffs said. “We have to see how the horse comes out and how he feels, but you’d always prefer to run. Running is probably the best option rather than training up to it, but we’ll wait and see how it all happens.”

The 1 1/8-mile Santa Anita Derby was worth 100 Kentucky Derby qualifying points for Honor A.P., moving the son of Honor Code to 120 points and into the No. 2 spot on the leaderboard behind Tiz the Law.

For five-time Kentucky Derby winner Bob Baffert, it was a week to forget. Not only was unbeaten Nadal retired after injuring his ankle in a workout, but Authentic lost for the first time in finishing second to Honor A.P. And, just before the race Baffert said his other unbeaten 3-year-old, Charlatan, is sidelined with a minor ankle issue and would be out at least 45 days, and also would miss the Derby.

“I was afraid of being on the outside,’’ Baffert said (Authentic broke outward from the No. 7 post). “He broke out and then caught his stride. He did all the heavy lifting all the way around to the stretch.”

Smith and Shirreffs teamed up to win the 2005 Kentucky Derby with 50-1 long shot Giacomo.

Honor A.P. had a smooth ride all the way around the track. Smith kept Honor A.P. behind the leaders Anneau d’Or, Authentic and Shooters Shoot. But as the field of seven raced midway through the final turn, Honor A.P. went into overdrive and blew past everyone to win with ease.

A recap of other stakes at Santa Anita on Saturday:

Swiss Skydiver ($3.20), with Mike Smith aboard, made easy work of three rivals in her trip to the West Coast and reaffirmed her status as the leading 3-year-old filly on the road to the Kentucky Oaks (G1) on Sept. 4.

Trained by Kenny McPeek, the well-traveled daughter of Daredevil already has three victories in five starts this year, capturing the Gulfstream Park Oaks (G2) on March 28 and the Fantasy Stakes (G1) at Oaklawn Park on May 1.

The 3-5 favorite won by four lengths over Speech, with Mermeith third and Regal Beauty fourth. Smiling Shirlee was scratched.

“When a horse puts their ears forward like that, that means there usually is something left in the tank,” Smith said after riding the filly for the first time. “They are kind of taking a breather, looking at things. When I tightened the reins up, she really accelerated.  I kept busy until the eighth pole and really, she was on cruise control after that. She’s an extremely talented filly.”

Swiss Sky Diver earned yet another 100 qualifying points for the Kentucky Oaks with the win, and ranks No. 1 with a total 310 points. Speech earned 40 points for second to move up to No. 7 on the leaderboard with 60 points.

At least it wasn’t a total downer from Bob Baffert.

Improbable, who came up short in the big races last year, scored a resounding victory over top older horses Midcourt and Higher Power.

The 4-year-old Baffert trainee ran second in the Rebel (G2) and the Arkansas Derby (G2) and fourth in the Kentucky Derby. He just couldn’t win a graded stakes race after his Los Alamitos Futurity (G1) score in December, 2018, but finally came through on Saturday.

Super Patriot ($5) staged a super rally from last place heading into the far turn and won by 1 ¾ lengths over Sedamar.

Ridden by Flavien Prat and trained by Richard Baltas, the 5-year-old mare covered the mile on turf in 1:35.66. Super Patriot was seven lengths back before starting her winning run in the field of six Cal-bred or sired fillies and mares.

It was a big day at Belmont Park, too:

Code of Honor ($4.50) made his 4-year-old debut a winning one with a strong move around the turn and overtaking Endorsed inside the 16th-pole for a half-length victory.

With rain coming down, John Velazquez kept the Travers (G1) and Jockey Club Gold Cup (G1) winner well back in the field before asking the colt to make his move. Trainer Shug McGaughey said he expected a strong effort and hopes to take another shot at the Breeders’ Cup Classic (G1) at Keeneland in November if Code of Honor continues on track.

“I think he beat a pretty good horse in Endorsed,’’ McGaughey said. “They were pretty far in front of the rest of them. Coming off that long layoff, I was very pleased.

Vekoma ($5.30) is off to a sensational start in his 4-year-old campaign, taking charge at the top of the stretch and cruising to a 7 ¼-length win over Network, with early leader American Anthem third.

The winner of the 2019 Blue Grass (G2), Vekoma was a disappointing 12th in the Kentucky Derby, and didn’t race the rest of the year. The George Weaver-trained colt returned in March and won the Sir Shackleton Stakes at Gulfstream Park. He simply dusted the field in the 7-furlong Carter, and Weaver says he’ll consider the Metropolitan Handicap (G1) for this son of Candy Ride’s next start.

“I think off that effort, we’ll look at the Met Mile. If we can get him back in four weeks and if he’s doing well, we’ll think about it,’’ Weaver said. “He’s such a special horse and he’s one of those horses that will do things that you may not think are ideal for him. He’s just that good. I’ve never had a horse with this much talent and determination in him. He just knows what he is.”

Winning time was 1:21.02, with Javier Castellano aboard for the colt’s sixth victory in eight career starts. The winner’s share of $137,500 put Vekoma over the $1 million earnings mark at $1,108,025 for owners R.A. Hill Stable and Gatsas Stables.

The field was reduced to eight with the scratches of Majestic Dunhill, Midnightcharly and Performer.

It was a 1-2-3-4 finish for top trainer Chad Brown, with Newspaperofrecord ($4.70) surprisingly moving straight to the lead and running off to a four-length victory over Regal Glory. Fellow Brown trainees Significant was third and Viadera fourth in the field of 10

She’s back. She ran brilliantly,” Brown said. “I wanted to see her back in the winner’s circle off a brilliant effort and she did that. She was up on the pace a little stronger than I had anticipated, but it was a great effort. I hope she comes out of it well.

Brown said he may consider the one-mile Just A Game (G1) at Belmont on June 27 for the filly’s next start.

Instilled Regard ($6.40) took lead with 3/16ths-of-a-mile to go and beat stablemate Devamani to give top trainer Chad Brown a 1-2 finish in the 1 1/8-mile race on the turf. The 5-year-old, ridden by Irad Ortiz, Jr., won for the first time in three starts this year, and improved to 4-3-4 in 17 career starts for OXO Equine.