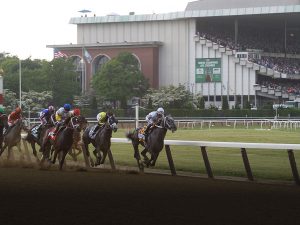 In a week that revealed several top jockeys, including Flavien Prat and Luis Saez, had tested positive for COVID-19, and raised concerns about the safety and well-being of so many in the racing industry, there was still plenty of great horses performing superbly on the dirt, on the turf, and particularly on the road to the Kentucky Derby.

On Saturday, Art Collector overtook the filly Swiss Skydiver in the stretch and won the Toyota Blue Grass Stakes (G2), elevating the 3-year-old colt to one of the top contenders for the Derby, rescheduled to Sept. 5. The race was the highlight of a unique five-day summer meet at Keeneland, which canceled its spring meet due to the coronavirus pandemic.

The final race of the meet on Sunday was the 1 ½-mile Elkhorn Stakes (G2) on the turf, won by even-money favorite Zulu Alpha ($4). 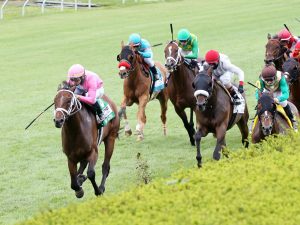 So before we rush into the full summer season, let’s savor some of the best horses that were on display at Belmont and Keeneland.

The 5-year-old Monomoy Girl, a champion at 3, is 2-for-2 this year in her comeback, winning an allowance at Churchill Downs in May, and then taking the Ruffian (G2) at Belmont on July 11; and 2019 Preakness winner War of Will won the Maker’s Mark Mile (G1) at Keeneland on July 10.

Now we pause before a busy week of racing with Saratoga opening on Thursday (July 16) with the Derby-points qualifier Peter Pan (G3), the $1 million Derby-qualifier Haskell (G1) at Monmouth Park on Saturday (July 18), and 3-year-old champ and Saudi Cup winner Maximum Security set to run for the first time for Hall of Fame trainer Bob Baffert in the San Diego Handicap (G2) at Del Mar (with Abel Cedillo named to ride).

The Keeneland meet, with no spectators, was a huge wagering success.

“Horsemen and fans alike highly anticipated the Summer Meet, and their expectations were exceeded by the breathtaking level of racing we enjoyed here this week,” Keeneland President and CEO Bill Thomason said in track press release. “I can’t express how much we missed our fans at Keeneland, and we thank them for their strong support from afar.”

Final wagering figures were not released by NYR on Sunday, but the reduced 25-day meet set several total handle records. Brown, a four-time Eclipse Award winner, was the top trainer with 23 wins, while Irad Ortiz, Jr., won the jockey title with 34 victories.