It’s time for the Breeders Crown, a two-day celebration where the best of the best in harness racing will go at it and try to establish or enhance their legacies. The Breeders Crown, though, is much different than thoroughbred’s Breeders’ Cup.

First of all, standardbreds race much more frequently, and Breeders Crown races are usually not all-or-nothing affairs, when the winner usually ends up a divisional champion. Should a heavy favorite lose or run poorly, chances are the horse may be racing again the next week.

There are 12 races over two days at Woodbine Mohawk Park this weekend. Friday is for the freshmen with finals being contested for 2-year old pacers and trotters, colts/geldings and fillies. Saturday’s card features eight races — four for 3-year olds, two opens and two for fillies and mares.

I could go through each race and break it down, but truth-be-told that’s not my strong suit and predicting the outcomes of the 2-year old races for me is an exercise in futility. With 12 races, what should you look for and look at?  For me, days like the Breeders Crown are about one thing – stars. You look for them and afterwards, you label them.

The Saturday card is full of stars. We’ll start with the Open Mare pace featuring Shartin N. The N means she is from New Zealand and this “Wonder from Down Under” has been dominant all year; in fact, she may be the one pacing mare who could hold her own against the boys. That won’t happen here, but this is a gal who’s paced a mile in 1:47 and change and glides over the track with great ease.

She did get beat by the very game Caviart Ally her last time out and while “Ally” is a fine mare, Shartin N is on a different level. This is her race to stamp herself as an all-timer and if she wins and wins impressively, she should be Horse of the Year; not Mare of the Year, or Older Horse of the Year, but Horse of the Year. That’s how good she’s been. If you can’t tell, I’m a big fan of small but speedy mare pacers.

The next star-maker race is for 3-year filly pacers and the one looking to establish that status is Warrawee Ubeaut. At 4-5, she’s the clear favorite and while any Breeders Crown field is star-laden, she will be looking to put on a show and make herself one to remember. This is her to race to win and no one would be shocked to see 4-5 become 2-5 before the post.

The sixth race — the $500,000 Breeders Crown Open Pace — is my favorite because there isn’t one horse that hasn’t done something of significance. These are the veterans, the old warhorses, the ones that have been around, racing and winning on a regular basis. Anytime a big purse is dangled, these horses show up and put on a good show.

The field is led by the reigning Horse of the Year, McWicked. The now 8-year old got off to somewhat of a slow start with some saying that perhaps he was over raced in 2018. But things took a turn for the good when he rallied in late stretch to win the Joe Gerrity Memorial at Saratoga Casino Hotel on July 20. Soon after the wins started coming and he enters the open 5-2 on the morning line.

He will be tested by all the others. Jimmy Freight, This Is The Plan, Dorsoduro Hanover, Courtly Choice and American History are all more than capable of prevailing. The only drawback is the absence of Lather Up, who paced the fastest mile in harness history when he stopped the clock in 1:46 at the Meadowlands in July. That tied the mark set by Always B Miki in 2016 at The Red Mile in Lexington. The 4-year old suffered an injury in October and has been retired. He’ll be at the Breeders Crown, where he will be feted with an official retirement ceremony.

The 3-year old Trot for colts and geldings is what I’m labeling the cementer.  This is the one division that the fans know about because of the Hambletonian, which is the most well-known of all harness races. Back on that August Saturday at The Meadowlands, Forbidden Trade, at 15-1, pulled off the upset. He is entered, but the oddsmakers have him at 10-1. 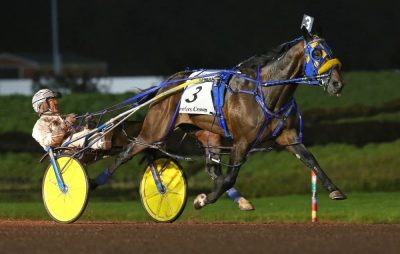 The one horse who was supposed to win the Hambo is Greenshoe and he is the 3-5 morning line favorite. He did not pout after his loss and comes to the Breeders Crown as the deserving favorite. There are two others in Gimpanzee and Green Manalishi that are certainly capable of winning and Don’t Letem, at 4-1 is far from a slouch.

This race will be the most bet for many reasons. Trotters always command attention and because these are the 3-year olds, and more or less a rematch of the Hambo, the eyes will be honed in come 9:44 p.m. ET. In reality, this is to standardbred racing what the Breeders’ Cup Classic is to thoroughbred racing. And, of all the races, it offers the deepest and most competitive field.

There is one race that offers mystery, aura and some international intrigue and that’s the Open Trot because it features the French-owned, 45-time winner named Bold Eagle, who is racing outside of Europe for the first time. He’s won many of the big races in Europe and now tries to introduce himself to harness racing fans on this side of the Atlantic. He will be driven by Hall of Famer Brian Sears, who has 30 Breeders Crown victories.

And, like the 3-year old trot, the field is deep and talented. Lindy The Great is 3-1; 2018 Hambletonian champ Atlanta, the filly, is looking to rebound from a disappointing finish at the Yonkers International Trot; 2016 Trotting Triple Crown winner and Canadian bred Marion Marauder who will always fight to the finish; and Guardian Angel As, another capable trotter. All have a shot at the $250,000 winner’s check in this $500,000 race.

Bold Eagle will garner the attention and those watching are eager to see just how good the Flying Frenchman is. He’ll likely leave early where he is sure to be challenged by the Ake Svanstedt trained and driven Six Pack.

Woodbine Mohawk Park has hosted before and the 7/8-mile track will provide a fast, fair and solid surface. Last year’s edition was contested at Pocono Downs, a 5/8-mile surface and while that track did a good job, most who enjoy harness racing prefer the 7/8-mile tracks that are Hoosier and Woodbine Mohawk Parks, and the mile oval at The Meadowlands.

Post time for both days is 7 p.m. ET, and both cards have 12 races.  If you like both versions of horse racing, these next two weeks are what you’ve been waiting for.