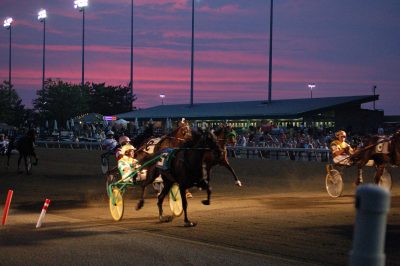 The field is set, and the $700,000 Meadowlands Pace on Saturday will feature a pair of longshot winners from the two elimination heats that determined the 10 qualifiers.

In last Saturday’s first elimination race, 81-1 shot Hellabalou defeated Charlie May and Chase H Hanover in a field of seven pacers; in the second elim, also with a field of seven, it was 10-1 choice Southwind Gendry pulling off the surprise win, with talented Perfect Spring third and Messenger Stakes winner American Courage fourth.

Hellabalou returned a whopping $165.80 on a $2 win ticket, with the top five finishers earning spot in the final on Saturday. The other two qualifiers from the first elim are One Eight Hundred and Rockyroad Hanover.

Perfect Sting, the top-ranked 2-year-old pacer in 2020, was looking to return to his winning form, but his third-place finish still qualified him for the final. Lawless Shadow, second at 12-1, and Abuckabett are the other two qualifiers for the final.

Usually, eliminations give us a clear idea of who will be the favorites in the final, but who knows what will happen now.

Here’s the way the field will line up for the Meadowlands Pace (drivers, trainers, odds in parentheses):

The second Saturday in July – this year July 10 — is always a big night at the Meadowlands. In addition to the Pace elims, the Graduate Series for pacers and trotters took place, featuring top 4-year-olds.

In the trot, Ready For Moni, the fourth choice at 7-1 won in 1:50.3 for trainer Nancy Takter, rallying from sixth.  The win pushed his career earnings over $1 million.

“My colt was really great tonight,” Takter said, “he had the ball in his court, and he took advantage of it.”

In the pacing final, Tattoo Artist set blistering fractions of 25.3 and 53.3. He hung in hard down the stretch, but Cattlewash was able to get to the lead to win in a very impressive 1:47.1; his first win in four tries this year for driver David Miller and trainer Ron Burke. The win was a change in strategy for the colt.

“He likes to lead, but tonight we had to settle it,” said Hall of Fame driver Miller. “I was impressed with him tonight, he settled real nice and when it was time to go, he was up for it. He’s pretty versatile.”

There were four divisions of the Reynolds Memorial for 3-year-old filly trotters; prep races for the upcoming Hambletonian Oaks and the winners were Beltassima, Dancinginthedark, Piper Hanover and Venerate. The four will be gearing up for the Oaks eliminations and hopefully, a spot in the Aug. 7 final.

Other stakes on Meadowlands Pace card

This Saturday’s Meadowlands Pace card is a dandy. There are eight stakes races totaling $2.5 million. The others: