Del Mar 2021 Preview: Where The Turf Meets The Surf

Southern California racing fans (well, racing fans across the country) will finally return to some semblance of normalcy on Friday as The Del Mar Thoroughbred Club’s 2021 summer race meet is set to get underway for the 82nd time.

Initially, the San Diego-area track will operate on a Friday-through-Sunday schedule for the first two weeks of the meeting and switch to a Thursday-through-Sunday lineup for the remainder of the season, which closes on Labor Day (Sept. 6). 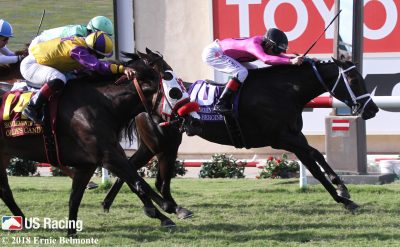 Additionally, with the COVID-19 pandemic retreating, the Del Mar facility will open to 100% capacity, a decision made in accordance with state and county public health guidelines. This means that anyone wanting to attend live racing must obtain a seating package at DMTC in advance of their arrival. Admission tickets and parking passes will be included in the package

“We are delighted to be able to welcome our fans back to Del Mar,” Del Mar Thoroughbred club president and COO Josh Rubinstein said. “We appreciate their patience as we have all adapted to the changing circumstances over the last 15 months. We also appreciate the thoughtful guidance and cooperation we have received from the California Department of Public Health, the San Diego County Department of Public Health along with Dr. Ghazala Sharieff, Chief Medical Officer of Scripps Health, and her expert staff.”

Read this: Saratoga 2021: Guide To A Season At The Spa

Del Mar will offer seating in its Stretch Run (grandstand), Clubhouse, Turf Club, Skyrooms, Luxury and Celebrity Suites and five restaurants. Total seating at the track is 14,994 and the status of general admission access remains day-to-day.

“We will continue to monitor public health guidelines and adjust our plans as the state makes additional progress and updates its recommendations,” Rubinstein said.

Opening day offers a 10-race card with most drawing full fields, including the traditional feature, the $100,000 Oceanside Stakes for sophomores. The 1-mile turf test attracted 14.

Exline-Border Racing, SAF Racing or Hausman, et al’s Dream Shake, who has just five starts to his credit, hasn’t won since breaking his maiden first out in February, but has earned three graded stakes placings and makes his turf debut for trainer Pete Eurton.

Downstream Racing’s None Above the Law, a California-bred gelding, is conditioned by Peter Miller and has four wins from 11 career starts, including a pair of stakes at Golden Gate Fields, one of which was on the turf. The Oceanside goes as the day’s ninth with a post time of 6 p.m. PT.

Del Mar will also roll out a traditional betting menu filled with the 17 standard straight win, place and show wagers and exotics like exactas, superfectas, pick fours and pick fives and pick sixes with new twists.

The Pick Six, formerly a $2 wager, will now be offered 20¢ ticket and will be called the “Rainbow Pick Six” with frequent large mandatory payout days. Additionally, Del Mar’s Super High 5 – available on the day’s last race – will change from a $1 wager down to 50¢.

The Pick Six at 20¢ and its large mandatory payout days have proven to be solidly in favor at racetracks throughout the country.

“We’re excited about the large wagering pools the ‘Rainbow Pick Six’ will generate,” Del Mar’s director of mutuels, Bill Navarro, said. “The 20¢ minimum gives small and mid-level players the ability to spread deep throughout the card.”

Del Mar’s ‘Rainbow Pick Six’ will payout 70 percent of the pool each day to those with the most winners and the remaining 30 percent will carry over, provided there are no single-ticket winners.

Repeat fan-favored wagers — the 50¢ Pick Four, beginning on Race 2; a 50¢ late Pick 5 offered on the last five races daily; and a $2 win, place, show Parlay available for a minimum of two races and a maximum of six.

$2 Win-Place-Show Parlay (all races but last)

In addition to a giant 30% overnight purse increase and tremendous Ship & Win program to attract more out-of-state competitors, this year the track has added two stakes to last year’s list of 32 with total stakes purses of $6.75 million, also representing a boost of 30% from last summer. A total of 21 major stakes purses were boosted by a minimum of $25,000 to a maximum of $250,000. The track’s centerpiece, the TVG Pacific Classic (G1) is slowly working its way back to $1 million and will be worth $750,000, up by $250,000 from last year.

“This is one of the strongest stakes schedules in Del Mar’s history,” David Jerkens, Del Mar’s racing secretary, said. “We have increased purses virtually across the board. I am really excited to see the level of quality our stakes program will attract, especially being the home of the Breeders’ Cup this year.” 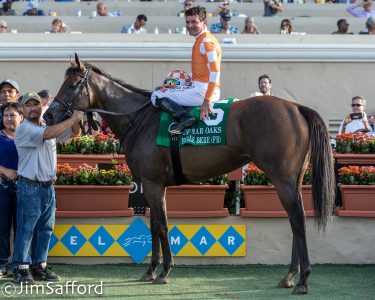 The complete stakes schedule can be found at DMTC

First post daily Where the Turf Meets the Surf will be 2 p.m. PT on all days except Fridays. Opening day Friday will have a 2 p.m. post, but then Fridays thereafter will see a 4 p.m. start with the exceptions of the last two Fridays of the meet (Aug. 27 and Sept. 3) when things get started at 3:30 p.m.