Upstart Up to the Task in the Razorback 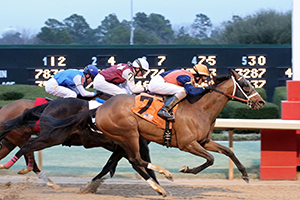 Upstart makes his 2016 debut a winning one with a come-from-behind victory over Domain’s Rap in the Grade II Razorback Handicap on Saturday (photo via www.oaklawn.com).

Ralph Evans’ Upstart was a bright star on last year’s Triple Crown Trail after winning the Holy Bull Stakes (GIII) and Fountain of Youth Stakes (GII) (second after a DQ), and finishing second in the Florida Derby (GI). But after an 18th- and last-place finish in the Kentucky Derby, the flashy son of Flatter couldn’t find a way to put things together successfully again and, unfortunately, finished his sophomore season winless in three subsequent graded-stakes starts.

After those disappointing efforts, trainer Rick Violette decided a nice, long rest was in Upstart’s best interests and the colt spent six months on the shelf resting and relaxing, gearing up for what his connections hoped was a brighter four-year-old campaign and a return to the form he’d shown last year. The decision proved fruitful as in his first start of 2016, Upstart earned an impressive victory by a length in the $350,000 Razorback Handicap (GII) at Oaklawn Park.

Under jockey Joe Bravo, Upstart was back in his familiar spot early, content to sit near the back of the pack in the early going while Shotgun Kowboy set all the pace in splits of :23.15, :47.50 and 1:12.94. As the frontrunners rounded the bend, Upstart was full of his patented late run and was swung wide for clear running room. Under a deliberate ride from Bravo, he reached the lead in time to log a mile 1:37.77 before pulling away to the clear victory, stopping the clock in 1:44.12 for the 1 1/16-mile distance. 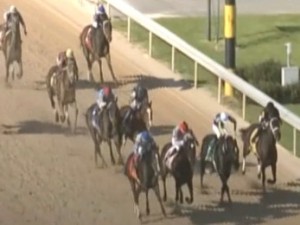 Upstart surges on the outside to win the 2016 Razorback Handicap.

“I’m going to give full credit to the whole Rick Violette team for bringing this horse together,” Bravo said. “When you’re off that long, it’s tough to get a horse ready to run. He left there really nicely, relaxed really good the first turn. Probably a little farther back than Rick wanted. But, he was so comfortable and relaxed. I was really happy the way he was going. You saw the move he made around the turn. He’s back. He’s a pretty nice horse. He proved it to everybody. I’m just glad he’s a big, happy horse for the rest of the season.”