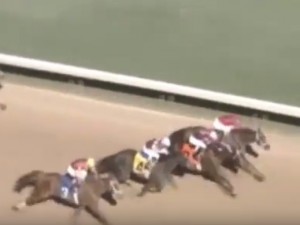 Call Pat sneaks through on the inside to nail Untapable at the wire.

Miller Racing’s Call Pat made an impressive last-to-first move and ran down a heavily favored Untapable in deep stretch to win Saturday’s $350,000 Azeri Stakes (GII) at Oaklawn Park. It was the second win in as many starts this year over the Arkansas oval for the Brad Cox trainee, who was ridden to victory by regular jockey Joe Rocco Jr. The daughter of Lawyer Ron was victorious by a neck in the 1 1/16-mile fast main track test.

Champion Untapable, making her first start since winning the Spinster Stakes (GI) at Keeneland nearly six months ago, held on to second at odds of 2-5 and was another half-length ahead of third-place finisher Streamline. Theogony, Sarah Sis, Kyriaki, Meshell and High Dollar Woman rounded out the final order of finish.

Call Pat, who broke from the innermost post position, was, as expected, taken back to the rear of the pack in the early going, content to let the speedy early runners set up shop on the front end. Longshot High Dollar woman led the field through moderate early splits of :23.11 and :47.83 for the first half-mile with Sarah Sis stalking to her inside and Untapable, fresh and rank and pulling at jockey Florent Geroux, pushing the frontrunner hard from the outside.

The pacesetting High Dollar tired and retreated rounding the far turn — just as Untapable put her head in front to log the three-quarters in 1:13.15. Meanwhile, Call Pat was starting her rally from far back but, at the top of the stretch, she still appeared to have a lot to do if she wanted to reach the wire in front.

Rocco never panicked aboard Call Pat, however, and with a deliberate drive began picking off the tiring runners in front of them. By the time Untapable reached the eighth pole in 1:38.20 Rocco and Call Pat only had the tiring favorite to run down to reach the wire in front. In deep stretch under a strong ride, Call Pat collared the tiring favorite and put her head in front to pick up the victory, stopping the Teletimer in 1:44.44.

“It was your typical Call Pat fashion,” Rocco said. “She falls back there and I just let her do her thing. We just kind of picked our way through there. She’s a nice mare. If you conserve her, she comes running.”

Call Pat, who is out of the Rahy Mare First Song, was bred in Kentucky by Don Ameche III, Don Ameche Jr., and Prancing Horse Enterprises. With the $210,000 winner’s share of the Azeri purse, her bankroll now stands at $614,589 with a record of 30-7-5-5. Her next start will likely be the Apple Blossom Handicap (GI) on April 15, where she will probably face Untapable, who won last year’s Apple Blossom after finishing second in the Azeri, once again.

“It’s important to get that first race (off a layoff),” Untapable’s trainer, Steve Asmussen, said. “She will definitely stay here and train and be pointed for the (G1) Apple Blossom next.”

The Azeri wasn’t without some heartbreak, however, as California shipper Kyriaki apparently collapsed and died after cooling out back at the barn. Owner Dominic Savides tweeted after the race that a veterinarian indicated Kyriaki may have suffered a ruptured artery in her pelvis. A necropsy has been scheduled.