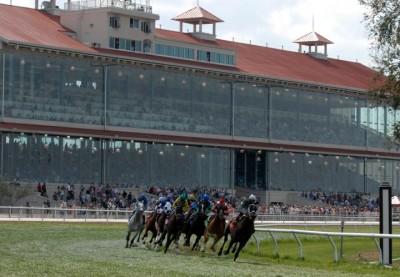 A field of 11 solid grass performers will race the about 1 1/8-mile distance in the $300,000 Muniz Memorial Handicap (GIIT) which has been carded as the 8th race of the afternoon.

Coming off three straight wins, including two against Grade III company, Chocolate Ride has been labeled the early 5-2 favorite and will break from post position four under Florent Geroux. Chocolate Ride has won six of seven starts, with a second, over the local Fair Grounds turf course and has won seven of his 11 grass starts overall. He’s also four-for-six, with a third, at nine grassy furlongs. Expect him to set sail right from the break and try to hold off any challenges at the wire.

Roman Approval has finished behind Chocolate Ride in his last two and is hoping to turn the tables. The Mike Maker-trained son of Roman Ruler has finished in the money in 11 of his 14 career turf starts but seems to like to finish second, having 14 runner-up finishes in 29 career starts overall.

Post time for the 8th race Muniz Memorial has been set at 4:52 p.m.