Enforceable looks to double down in Risen Star

It’s double gumbo for Triple Crown hopefuls on Saturday at the Fair Grounds.

With an overflow field of 23 entered for the Risen Star (G2), management opted to split the field into two divisions. So, there will be two stakes each worth $400,000. More importantly for the long-range view, each division will award the winner 50 qualifying points for the Kentucky Derby (G1).

“In a very competitive marketplace, we are thrilled by the level of the response to the Risen Star from horsemen nationwide and are proud to be able to split the race into two divisions,” said Fair Grounds’ senior director of racing Jason Boulet.

Yes, we have reached the serious portion of the program as we enter the “Championship Series” portion of the points system. In most years, 50 points are enough to secure a starting berth in the Derby.

The card also features the season debut of undefeated champion British Idiom in the $300,000 Rachel Alexandra (G2) for 3-year-old fillies on their path to the Kentucky Oaks (G1).

The first Risen Star division offers a rematch of the Lecomte Stakes (G3), the local prep last month for the Risen Star, with the first three finishers squaring off again. 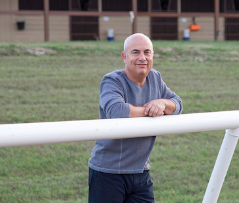 Enforceable from the Mark Casse barn was the winner with a powerful closing sweep from 11th to score by a comfortable 1 1/2 lengths at 6-1.

For the first time, the Risen Star will be contested at 1 1/8 miles, a half furlong longer than the Lecomte.

The added distance should play perfectly into Enforceable’s rallying style.

Silver State also closed well, getting second in his stakes debut at a well-backed 3-1 price for trainer Steve Asmussen, while Mr. Monomoy checked in third for trainer Brad Cox after chasing the pace.

For those seeking a possible breakout performer, we suggest giving Scabbard a look. He is one of those horses who always seems to find trouble in a race, as in the Lecomte where he steadied at the quarter pole before finishing fifth.

If Joel Rosario, aboard for the first time for trainer Eddie Kenneally, can fashion a clean trip from the outside post, Scabbard could surprise.

The chestnut colt, fourth in the Breeders’ Cup Juvenile (G1), has long hinted at more potential than he has shown so far.

Speaking of the BC Juvenile, that gives us an easy segue into the second division, where Anneau d’Or makes his season debut.

Talk about a hard-luck freshman campaign. After capturing his debut on the turf at Golden Gate Fields, Anneau d’Or switched surfaces and jumped right into the BC Juvenile, only to be beaten by a head at 28-1.

He closed out the season with another near-miss, losing the Los Alamitos Futurity (G2) by only a neck.

“In my opinion, we were a head and a neck away from winning an Eclipse Award,” trainer Blaine Wright said, who added the timing of the Risen Star factored into the decision to make the trip from California.

“The spacing between the Risen Star and the Santa Anita Derby (G1) on April 4) is really nice,” Wright said. “It allows us to travel across the country, come back and still get six weeks in between races. Those are the two races we’ve targeted, and hopefully the horse and I will keep doing what it takes to get us where we want to go.”

Anneau d’Or will add blinkers, and jockey Rosario, for the first time.

The race of the day could very well be the Rachel Alexandra, where unbeaten Eclipse Award winner British Idiom tackles Finite, a winner of four straight including the Silverbulletday here last month. 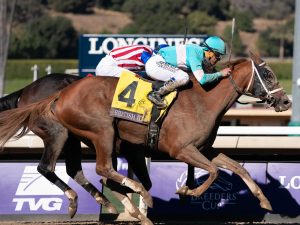 This will be British Idiom’s first race since she outdueled Donna Veloce by a neck in the Breeders’ Cup Juvenile Fillies (G1).

“She’s coming into this race every bit as good as she was when she went into Breeders’ Cup,” Cox said. “I’m really excited about how she’s training, and I think she’ll run really well Saturday.”