The racecourses of Europe come in all shapes and sizes, and Kentucky Downs would be a perfect fit there. In the United States, there’s nothing like it. From the air, its 1 5/16-mile turf course looks like a giant pear, and its stretch of more than a quarter-mile is the nation’s longest on grass. Its undulations challenge even the most agile thoroughbred, with a downhill run from the backstretch giving way to a gradual climb to the finish line.

For six days in late summer, it’s all turf all the time over the layout once known as Dueling Grounds to honor its bloody past. It’s only a few miles from Tennessee, where dueling was illegal, so it was a convenient venue for many one-on-one shootouts in the 19th century. In 1826, future Texas freedom fighter Sam Houston, then a Tennessee congressman, wounded a political rival. General William White survived, but many died “defending their honor.”

Like Houston, Joel Rosario was on target last Saturday, opening day, and Monday, riding 10 winners, five each day. I asked his agent, Ron Anderson, what he looks for when booking mounts at Kentucky Downs.

“At a short meet like this, it’s focusing on trainers that point for this specific six days and who have had success here in the past,” Anderson said. “And it helps to have a guy who rides the place so well.”

It also helps to focus on course-and-distance winners at a track where some horses thrive, and others struggle.

With Saratoga and Del Mar closed and Churchill Downs and Belmont Park dark until Sept. 16, Kentucky Downs is the September place to be this week, and Saturday’s card features five consecutive graded stakes, two with million-dollar purses. Let’s see if I can help you cash a few tickets in rolling pick 3s, starting with the sixth race.

California shipper Venetian Harbor (10), the class of the field and the main speed, wired Santa Anita’s Grade 2 Monrovia on turf at this distance. She’s done most of her damage on dirt, where she’s 3-for-8, with three seconds against Grade 1 winners Gamine, Swiss Skydiver and Shedaresthedevil.

Venetian Harbor looks strong, but what if she doesn’t handle the quirky layout? If you want to spread, I’d also use Jeanie B (8) and Catch a Bid (7). 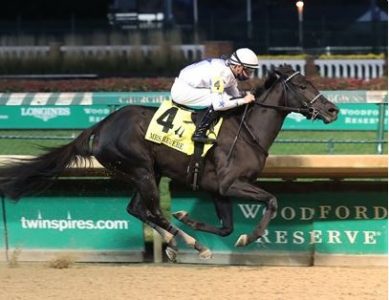 Princess Grace (2) is clearly the horse to beat off her easy win in the Grade 2 Yellow Ribbon at Del Mar. She’s a two-time stakes winner and a half-length away from being 5-for-5 around two turns on grass. She looks like a reliable single, but if you’re looking for a longshot, consider putting She’sonthewarpath (5), 8-for-16 on turf, and course-and-distance winner Summer in Saratoga (8) on the ticket.

Got Stormy (9) will be a very short price after dominating males in Saratoga’s Grade 1 Fourstardave. She cruised by 3 1/2 lengths in a sprint stakes at Kentucky Downs last year, and a rerun would be no surprise. She’s 12-for-29 on grass, has earned more than $2.3 million, and looks like the most reliable single in the five stakes. But if you’re allergic to chalk, Fast Boat (2) should be used, along with two-time stakes winner Casa Creed (7), a powerful finisher who was third in the Fourstardave. Another possibility is Imprimis (10), who’s lost four of five since edging Front Run the Fed (6) in this race last year.

Arklow (5) loves the course (2-for-3, $1.2 million in earnings) but may have lost a step or two at age 7. He ran seventh and sixth in his last two but had valid excuses (clipping heels, then a wide trip behind a slow pace). He’s won three of his last four over 12 furlongs, losing only in the Breeders’ Cup Turf, and with a clear run he should regain his old form.

I won’t be trying to beat him in a race whose pace shape should favor him. Channel Cat (3) and Tide of the Sea (4) like 12 furlongs, but their need-to-lead tactics may cancel each other out and set up Arklow.

Point Me By (10) will be very tough if he repeats his impressive effort in the Grade 1 Bruce D over a mile, when he surged to draw off by 2 3/4 lengths. He’ll have to pass Wesley Ward speedsters Into the Sunrise (1) and Next (6). I’m intrigued by English shipper The Lir Jet (2), a first-time gelding who was in over his head in his last three against top-class English sprinters. He’ll be a huge price while getting serious class relief. If he returns to his stakes-winning form of last summer, he could be in the mix.