Eddie Mac’s Book: Pick 5 Play in Florida After Pick 3 Score at Big A

My mother always stressed the importance of making a good first impression, which I did in last week’s debut column.

Unfortunately, there was the nagging regret that I would have won twice as much if I’d played the double and pick 3 for $2 instead of $1. As I endured gridlock on the Belt Parkway, I recalled the wisdom of the venerable maven Harvey Pack: “The less you bet, the more you lose when you win.”

You rarely keep racetrack profits for long, but maybe I can keep this column in the black for a while. Let’s move from chilly Aqueduct to balmy Gulfstream Park, which is featuring a pick 5 starting in Saturday’s seventh race.

$100,000 My Charmer (mile, turf)
Mitchell Road, trained by Hall of Famer Bill Mott, looks like a standout. Her only bad races came against Chad Brown’s superstars Uni and Sistercharlie, and she has two wins and two seconds on Gulfstream’s grass. She also has speed, the rail and tactically brilliant Jose Ortiz. The only problem could be the price, which may hover around even money. At 7-5 or more, I’ll bet her to win.

$100,000 Rampart (mile, Grade 3)
Cookie Dough drew the far outside in a field of 11 but looks like the main speed with Paco Lopez, an excellent front-end rider. The others on the ticket are Molto Bella and Pink Sands.
$200,000 Fort Lauderdale (1 1/8 miles, turf, Grade 2)
Marathon specialist Channel Cat is the marquee horse, but is 1 1/8 miles too short for him? He’s 0-for-2 at the distance, but this is a major class drop from the 1½-mile Breeders’ Cup Turf, in which he was only 2½ lengths behind likely Horse of the Year Bricks and Mortar. If Channel Cat finds 9 furlongs too sharp, expect the winner to come from among Flavius, Cross Border, Marzo and Admissions Office. 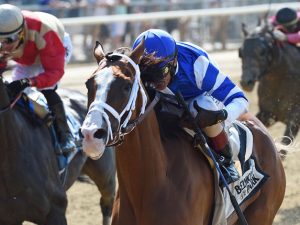 I’ll single Prince Lucky, who goes for longtime Gulfstream dominators Todd Pletcher and John Velazquez. He’s 2-for-2 over the track, 2-for-4 at the distance. War Story will draw money, but I’ve never been a fan of his because he’s so inconsistent. Bodexpress, the loose horse in the Preakness, has speed and three seconds in four tries at Gulfstream, including one behind Maximum Security in the Florida Derby. I’ll use him under Prince Lucky in an exacta.
$16,000 claimer (1 1/16 miles, turf)

Unfortunately, the pick 5 finale is a grass grab bag with low-level claimers. My Point Exactly looks like the main speed with Lopez but must clear the field quickly from post 11. If that doesn’t happen, the likeliest winners are horse for course King Orb, class dropper Dakota’s Dude and last-out winner Victor Lounge.