Answer In May Resolve the Springboard Mile Question

The rocky Road to the Kentucky Derby on the first Saturday in May takes many twists and turns over several months, and on Sunday it cuts through Oklahoma, where Remington Park hosts the $400,000 Springboard Mile for a full field of 12 juveniles trying to make a name for themselves while vying for qualifying points.

“I call this race the Super Early Derby Prep,” said Madaket Stables’ Sol Kumin, who recently contacted Robert LaPenta to partner on Answer In, the 5-2 early favorite despite being one of the least experienced 2-year-old colts and geldings all turning 3 officially on Jan. 1

“Bob and I have obviously had a lot of success together with Catholic Boy (multiple Grade 1 winner), Uni (Breeders’ Cup Mile winner), Whitmore (G1 winning sprinter), and others,’’ Kumin said. “We’ve got a bunch of really good horses together. I knew that he liked this horse, so I approached Bob about buying a piece and he was great. This will be our first race together with him. I’m really excited.”

There is a lot to get jazzed about with Answer In, a gelded son of Dialed In out of a Broken Vow mare, who sold as a weanling for $175,000. He graduated from the maiden ranks at second asking last out in a 6-furlong test at Churchill Downs and romped to finish 5 ½ lengths in front. Moreover, he is trained by Brad Cox and picks up the services of Hall of Famer Javier Castellano.

Kumin is unconcerned about the youngster’s relative inexperience as compared to others in the field and thinks Answer In is a horse on the upswing.

“I’ve obviously I’ve had a lot of good horses with Brad Cox like Monomoy Girl (2018 BC Distaff, Kentucky Oaks winner), British Idiom (BC Juvenile Fillies winner) and others,” Kumin said. “One of the things about Brad is that when he has a plan, and the plan is executed to where he picks the race and the horse is able to go where he’s thought about sending him for a while, his success rate is pretty good. At least it’s worked out that way with me and the good horses I’ve had with him. As for Javier riding this horse for the first time, we’ve had good luck with him, and he’s been riding a lot more of our horses and doing a great job so I think that will be a good thing. I’m just a minority partner here, but I’m pretty excited.” 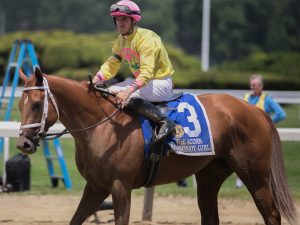 The Springboard Mile, which has produced Kentucky Derby starters in each of the last two years and three of the past four years, awards qualifying points (10-4-2-1) for the first four finishers. To add some of those coveted points to his sheet, along with the purse awards, Answer In will have to defend a three-flank attack from Hall of Famer Steve Asmussen, who is Remington’s all-time leading trainer and maintains a division there. Asmussen has entered Jungle Runner, Rowdy Yates and Shoplifted.

Calumet Farm homebred Jungle Runner is undefeated in two tries on his home track, where he took the Clever Trevor at 7 furlongs Nov. 1 and has scored in a 1-mile race. Oklahoma-bred Rowdy Yates comes in off two consecutive stakes wins over the track. Shoplifted, owned by Robert Clay’s Grandview Equine, Everett Dobson’s Cheyenne Stables and Jaime, Nanci and Larry Roth’s LNJ Foxwoods, is a son of Into Mischief now getting considerable and welcome class relief.

Shoplifted has competed in Grade 1 company in his last three outings, finishing seventh in the BC Juvenile November, fifth in the American Pharoah and second in the Hopeful at Saratoga. In his only other effort, he turned heads at Saratoga with a stunning 4 ½-length score while graduating from the maiden ranks. He’ll break from post 9 under Ricardo Santana, Jr., which is telling as he is Asmussen’s go-to rider, and he is a generous 5-1 on the morning line.

Rowdy Yates, owned by the Tulsa, Oklahoma-based partnership of L & N Racing, is no stranger to the national scene, having captured the Ellis Park Juvenile Aug. 18 at 7 furlongs, running second in the Bashford Manor (G3) at Churchill Downs. By Morning Line, he was scooped up for $42,000 at the 2018 October Fasig-Tipton sale.

“We had a tip that he was going to be a nice horse at the sale,” co-owner Lee Levinson said. “He’s a Morning Line, out of a nothing mare and people thought we were crazy to give forty-some-thousand for him. We just thought he was good looking and we rolled the dice, hoping to get lucky.”

Rowdy Yates has been training at Remington, where stablemate Jungle Runner, a son of Candy Ride out of a Tapit mare, is also based so those two might be able to fall back on some home court advantage. Rowdy Yates, who will be partnered once again with Richard Eramia, is second choice on the morning line at 7-2 while Jungle Runner and Ramon Vazquez may be an overlay at 15-1.

“There is no doubt there are some good horses in there. Shoplifted is really nice. There are always a couple of good horses that come out of here so it’s not going to be easy,” Kumin acknowledged.

Others worthy of consideration are the Mike Stidham-trained Embolden, installed as the 9-2 third choice, and Maximiliano at 5-1. Maximiliano, by Quality Road, is stepping up from a maiden special win last out in his second start, but he is trained by Wesley Ward, whose reputation for masterful handling of 2-year-olds is well documented. Maximiliano will be partnered for the first time with Martin Garcia, the journeyman who recently relocated his tack from Southern California to the Midwest to jumpstart his career.

Embolden returns to the dirt after making his last four starts on the turf, but the winner of the Jamestown Stakes for Virginia-breds in September at Colonial Downs did finish third in the Belmont Futurity (G3) in October, and the winner of that race, Four Wheel Drive, went on to win BC Juvenile Turf next time out.

The Springboard Mile is the highlight of and 12th race on the 13-race card, which features six stakes and closes out Remington’s current meet. Post time for the Springboard is 9:12 p.m.