The Belmont Stakes at 1 1/8 miles. The Kentucky Derby in September, the Preakness in October. The Travers as a Derby prep. The New Abnormal of 2020 blew up the 3-year-old template.

At least traditionalists can be happy that one prestigious race is still in its familiar spot on the calendar. For the 26th consecutive year the Grade 1 Whitney is anchored in late July or early August. Saturday will mark the 93rd running of the Whitney, whose winner will earn a spot in the Breeders’ Cup Classic. 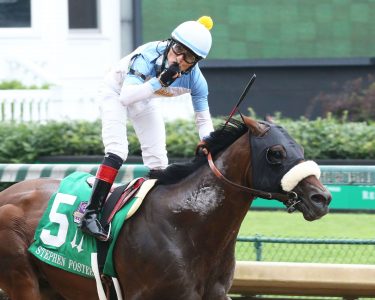 He’ll have to beat Tom’s d’Etat, coming off a 4¼-length romp in the Stephen Foster at Churchill Downs. That was the fourth consecutive graded-stakes victory for a 7-year-old standout who is 11-for-18 lifetime. He’s 3-for-4 at Saratoga and a deserving 6-5 morning-line favorite. His versatility makes him even more intimidating.

“When the pace is fast, he comes from off the pace,” trainer Al Stall Jr. said. “And if it’s slow, he’s right on top of it.”

Code of Honor’s too-late rally left him third behind the brilliant Vekoma in the Met Mile. Trainer Shug McGaughey is hopeful his two-time Grade 1 winner moves up going an extra furlong and around two turns.

“I’m looking forward to running him over a mile and an eighth over this track,” McGaughey said. “It won’t be easy. I just hope Code of Honor runs a monster race.”

I’ll also try to figure out the Spa’s Grade 1 H. Allen Jerkens. The other two races are at Del Mar — the Shared Belief for Derby hopefuls and the Bing Crosby, a Grade 1 sprint.

The five-horse Whitney is so deep that the only obvious throwout is Mr. Buff, and he has 14 wins and earnings of more than $1 million. I respect By My Standards but he lacks Grade 1 credentials. Bob Baffert’s Improbable dominated the Santa Anita Gold Cup last time, but he’s lost seven of his last nine and is 0-for-2 at 9 furlongs. I’m leaving him out, too.

That leaves Tom’s d’Etat (5) and Code of Honor (3), who will need a career top while Tom’s d’Etat regresses. Difficult but not impossible.

“I’d like to get some pace,” McGaughey said, and he should get it from Improbable and Mr. Buff. I’ll take a shot with a win bet on Code of Honor and use him and Tom’s d’Etat in the double to four horses in the H. Allen Jerkens.

This 11-horse puzzle is led by No Parole (6), who’s 5-for-5 at a mile or shorter. Challenging him again are Echo Town (4) and Mischevious Alex (5), second and fourth, respectively, last out in the 7-furlong, Grade 1 Woody Stephens. The other one is Belmont Stakes also-ran Tap It to Win (11), whose best races (and all three wins) were around one turn.

Mischevious Alex was expected to be a pace factor in the Woody Stephens, but he was bumped at the start and never made the lead. No Parole was unchallenged through a half-mile in a zippy 45 seconds and never was threatened, cruising by 3¾ lengths. Tap It to Win should put some heat on him, and maybe Mischevious Alex can rebound with a stalking trip.

I’ll play Mischevious Alex to win and key him in exacta boxes with No Parole, Echo Town and Tap It to Win. I’ll have all four on double tickets with Tom’s d’Etat and Code of Honor.

Santa Anita Derby hero Honor A.P. (5) is just tuning up for the Sept. 5 Kentucky Derby. He doesn’t have to win (he has 120 Derby qualifying points) and won’t be fully cranked. Less than his best should be good enough to beat four rivals.

Cezanne (2-for-2 but in his stakes debut) makes a huge class jump from a $40,000 optional claimer, but he has upside and is trained by Baffert, so you never can tell. I wouldn’t touch Baffert’s other runner, Thousand Words, because he’s 0-for-3, beaten 44 lengths, since starting 3-for-3.

Cezanne (6) has no Derby points and needs to be at least second in this 50-20-10-5 prep. It’s go time, and he’s likely to make a forward move. Make a small win bet on him and play him underneath Honor A.P. in an exacta.

The undefeated Uncle Chuck would have had a good chance to knock off Honor A.P., but Baffert decided to reroute him to next Saturday’s Travers. The son of Uncle Mo is 2-for-2 by a total of 11 lengths, and maybe he’ll give Belmont Stakes winner Tiz the Law a serious test at Saratoga.

“He’s learning quickly, and he has brilliance,” Baffert said after Uncle Chuck dominated the Los Alamitos Derby by four lengths, doing the final furlong in 11 4/5 seconds. “I was impressed. I think we just saw something pretty special, and he’s been special from day one. He’s got gears, and he’s bred to be any kind.”

Keep an eye out for him in the Midsummer Derby.

The complexion of this race changed dramatically after another audible by Baffert, who decided not to run McKinzie at 6 furlongs for the first time. He said he withdrew last year’s Whitney winner because he didn’t like having post 4 in a field of 10.

“He drew the inside, and this track hasn’t been playing very good,” Baffert said. “It’s been really deep and loose. If it would have been a shorter field and he drew outside, we maybe would have taken a chance at it.”

The field has plenty of speed (Lexitonian, Anyportinastorm, Law Abidin Citizen), as California sprints always do. That could set up a nice trip for accomplished stalker Fashionably Fast (6), second by 1½ lengths to McKinzie on June 7 in the 7-furlong Triple Bend. Before that Fashionably Fast won six in a row, although five were against fellow California-breds. He’s 3-for-5 at 6 furlongs and also 3-for-5 at Del Mar.

Desert Law (3), runner-up in this race last year, is 9-for-17 lifetime in the exacta and could slip into second or third. Another exotics possibility is Collusion Illusion (9), who’s 2-for-2 at the distance and over the track.