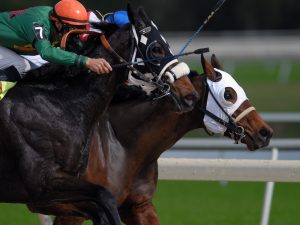 The 40th running of the $350,000 Tampa Bay Derby (G2) Saturday drew a full 12-horse field with two likely standouts leading a field of up-and-comers hoping to boost their credentials for the Kentucky Derby – now just eight weeks away.

The 1 1/16-mile Tampa Bay Derby is the centerpiece of a 12-race card that features five stakes races including three other graded stakes, the Challenger (G3), Hillsborough (G2), and Florida Oaks (G3).

The Tampa Bay Derby sets up as an interesting showdown between SOLE VOLANTE, who upset last month’s Sam F. Davis (G3) at Tampa for trainer Patrick Biancone, and CHANCE IT, a veteran of the rich Florida juvenile stakes program topped by a win in the $400,000 In Reality, plus a victory over open company at Gulfstream back on Jan. 4 in the Mucho Macho Man Stakes for trainer Saffie Joseph, Jr. The list of serious challengers in the race includes a trio of Todd Pletcher trainees stepping into the stakes ranks for the first time, TEXAS SWING, MARKET ANALYSIS, and the maiden, UNRIGHTEOUS.

Sole Volante was excellent in his win in the Sam F. Davis – the local prep for the Tampa Bay Derby – sitting off a fast pace and then charging up the rail to win by 2 ½ lengths over a field that included Independence Hall, the previously unbeaten winner of the Jerome and the Nashua (G3) at Aqueduct.  Sole Volante figures to get a very live pace to chase again in the Tampa Bay Derby, which will help his chances as new rider Florent Geroux picks up the reigns for regular rider Luca Panici, who is out with a broken collar bone.

In order to win, Sole Volante will need to turn the tables on Chance It, who beat him handily two starts back in the Mucho Macho Man, which is a $100k stakes race at one mile around one turn at Gulfstream.  Sole Volante’s hopes for revenge in the Tampa Bay Derby rest with the possibility that the increased distance at 1 1/16 miles around two turns will help him, while also perhaps hurting Chance It in a race with plenty of pace.

If Chance It will have distance limitations, however, it might not be apparent enough at 1 1/16 miles to cost him the race. Originally entered in last week’s Fountain of Youth (G2) at his home track at Gulfstream, Chance It drew post 12 and his connections opted to scratch out of that spot and opt for the Tampa Bay Derby instead. Chance It drew ideally this time in post 4 as Paco Lopez picks up the mount. Chance It has already won at this distance in the In Reality, and has consistently shown the ability to press the pace and rate, making him very tough to beat.

If there is a potential upsetter, it will likely hail from the barn of Pletcher, who has won the race five times, including four out of the last seven years. He always has 3-year-olds in this stable pointed toward this race, and while 2020’s Pletcher contingent may not be his strongest, the trio of Texas Swing, Market Analysis, and Unrighteous certainly could contain a winner. Marker Analysis won at first asking at 7 furlongs in January, and Texas Swing went wire-to-wire to break his maiden in a 1 mile & 40-yard race at Tampa in February. John Velazquez is in town to ride Market Analysis, while Javier Castellano takes over the mount on Texas Swing.

INDEPENDENCE HALL, originally pointed to the Tampa Bay Derby, will bypass the race in favor of the Florida Derby (G1) later this month.

The undercard is highlighted by the Hillsborough (G2), for older turf females going 1 1/8 miles, and the Florida Oaks (G3), for 3-year-old fillies racing 1 1/16-miles on the grass. The favorite and horse to beat in the Hillsborough is STARSHIP JUBILEE, the Grade 1 winner of the E. P. Taylor last year for trainer Kevin Attard, who most recently exits back-to-back big wins to start 2020 in the Sunshine Millions Filly & Mare Turf and in the Suwanee River (G3). The Florida Oaks field is led by WALK IN MARRAKESH, who just missed by a nose in her North American debut last fall in the Natalma (G1) at Woodbine for trainer Ignacio Correas. The most interesting challenger in the Oaks is the undefeated NEW YORK GROOVE, who has run-up a 4-for-4 record in artificial track sprints for trainer Michael Trombetta, who fascinatingly chooses this spot for the filly’s 3-year-old debut.