Good Magic has been made the 2-1 morning line favorite in Saturday’s Travers Stakes at Saratoga (photo by Jordan Thomson).

The Travers has long been the centerpiece of the Saratoga meet, though the Sword Dancer (G1), which will offer an automatic starting berth into the Longines Breeders’ Cup Turf, Personal Ensign (Longines Distaff), Forego (Dirt Mile) and Ballerina (Filly & Mare Sprint) all rate as automatic qualifiers for the Breeders’ Cup at Churchill Downs and have lured all-star fields.

The 1 ¼-mile Travers, along with the Sword Dancer, will air live on NBC from 4:00-6:00 p.m. ET as a part of the “Breeders’ Cup Challenge Series: Win and You’re In –Presented by America’s Best Racing” program. Saturday’s race could continue a big second half of the year for E Five Racing Thoroughbreds and Stonestreet Stable’s Good Magic (Jose Ortiz, post 9), who already secured a berth into the Breeders’ Cup Classic when he won the Haskell Invitational (G1) July 29 for trainer Chad Brown. The son of 2007 Classic winner Curlin cemented his championship last year with a win in the Juvenile at Del Mar and has enjoyed a solid 3-year-old campaign, winning the Blue Grass (G2) at Keeneland in April before running second and fourth, respectively, behind Justify in the Kentucky Derby and Preakness. Good Magic is 3-for-8 lifetime and will look to give local hero Brown his first Travers win.

Competition runs deep, however, with Calumet Farm’s BRAVAZO (Luis Saez, post 4, 12-1), second in the Preakness and Haskell, looming large for trainer D. Wayne Lukas, while phoenix Thoroughbreds’ GRONKOWSKI (Joel Rosario, post 3, 4-1), who was an impressive and troubled second in the Belmont behind Justify in his first US start, will give Brown a stiff 1-2 punch.

There’s plenty of other intrigue as well with the entry of Gary Barber’s talented filly WONDER GADOT (Irad Ortiz, Jr., post 2), winner of both the Queen’s Plate and the Prince of Wales’s Stakes, and Bob LaPenta’s CATHOLIC BOY (Javier Castellano, post 11, 8-1), the best 3-year-old turf horse in the country off a win in the Belmont Derby (G1) and Grade II winner on dirt for trainer Jonathan Thomas.

Even furthering the Travers drama is the entry of last year’s Breeders’ Cup Juvenile Turf (G1) winner MENDELSSOHN (Ryan Moore, post 8, 12-1), who finished 20th in the Kentucky Derby and third, beaten nine lengths in the Dwyer (G2) at Belmont in July for trainer Aidan O’Brien.

While the Travers is the obvious main attraction, Saturday’s four Grade I “Win and You’re In” Challenge races are loaded with equine star power that figures to have a direct impact on the proceedings later this fall at Churchill Downs.

The most enticing matchup looms in the 1 1/8-mile $700,000 Personal Ensign, which will award an automatic starting berth into the Longines Breeders’ Cup Distaff (G1), as China Horse Club International and Clearsky Farm’s ABEL TASMAN, who was second in last year’s Distaff at Del Mar, and Adele Dilschneider and Claiborne Farm’s homebred ELATE, who won the local Alabama (G1) last year, will clash for the first time this year.

The former, a 4-year-old daughter of Quality Road trained by Bob Baffert, already secured a berth into the Distaff when she won Belmont Park’s “Win and You’re In” Ogden Phipps (G1) June 9, while the latter, a 4-year-old daughter of Medaglia d’Oro who was fourth in the Distaff last year for trainer Bill Mott, kicked off her 2018 campaign with a win in the Delaware Handicap (G2) July 14.

The presence of Abel Tasman and Elate figure to keep the Personal Ensign field at a minimum, with FARRELL and WOW CAT, who were 1-2 respectively in the local prep, the July 29 Shuvee (G3), leading the way. FUHRIOUSLY KISSED will also run in the “Win and You’re In” Personal Ensign.

The $1 million Sword Dancer, run at 1 ½ miles, offers an automatic starting berth into the Longines Breeders’ Cup Turf and is shaping up as a deep and competitive field, with Gary Barber and Wachtel Stable’s CHANNEL MARKER and Woodslane Farm’s homebred and defending champion SADLER’S JOY, who ran 1-3, respectively, in the local prep, the Bowling Green (G2), leading the way. The former, a 4-year-old son of 2007 Turf winner English Channel trained by Mott, broke a seven-race losing streak in the Bowling Green, while the latter, a 5-year-old son of Kitten’s Joy, delivered his usual late run for trainer Tom Albertrani.

Neither Channel Maker or Sadler’s Joy could go favored, however, as both FUNTASTIC, who won the United Nations (G1) June 30 for trainer Chad Brown, and SPRING QUALITY, who won the Manhattan (G1) June 9 for trainer Graham Motion, have a ton of upside for ace turf barns. BIGGER PICTURE, HI HAPPY (ARG), REVVED UP is also entered in the “Win and You’re In” Sword Dancer. 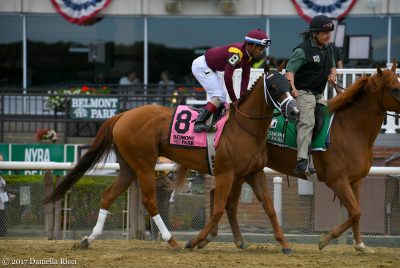 The $600,000 Forego, run at seven furlongs, will award an automatic starting berth into the Breeders’ Cup Dirt Mile and is shaping up as a tremendous race, with Mr. and Mrs. William Warren’s CITY OF LIGHT and Katherine Ball’s homebred LIMOUSINE LIBERAL leading the way. The former, a 4-year-old son of Quality Road, won the Triple Bend in March (G1) at Santa Anita for trainer Mike McCarthy and beat Accelerate, the top handicap horse in the country, in the Oaklawn Handicap (G2) in April, while the latter, a 6-year-old son of Successful Appeal, qualified for the TwinSpires Breeders’ Cup Sprint when he won the Belmont Sprint Championship (G2) July 7 for trainer Ben Colebrook.

A bevy of stakes winners are lining up to take on the two favorites, with WHITMORE, just a neck behind when second to Limousine Liberal at Belmont, an obvious danger, as is WARRIOR’S CLUB, a rallying second behind sprint leader Imperial Hint in the local July 28 Alfred G. Vanderbilt (G1). AWESOME SLEW, C Z ROCKET, HEARTWOOD and NO DOZING are also in with a chance in the “Win and You’re In” Forego.

The $500,000 Ballerina (G1), run at seven furlongs, offers an automatic starting berth into the Breeders’ Cup Filly & Mare Sprint and looks to have the shortest field of the quartet of Challenge races, though the six expected bring gaudy resumes. Carl Moore’s FINLEY’SLUCKYCHARM figures as the gal to beat off her win in the local prep, the July 25 Honorable Miss (G2) for trainer Bret Calhoun. The 5-year-old daughter of Twirling Candy is 11-for-17 lifetime has been a mainstay at the top of the division the past two years and secured her first career grade I when she won the Madison in April at Keeneland.

LEWIS BAY figures a handful for trainer Chad Brown if she can run back to her 5 ½-length romp in Belmont’s Bed O’ Roses (GIII) June 8, and she was third, beaten just a neck, in the Madison. HIGHWAY STAR, second, beaten a head, in last year’s Ballerina is also expected, as are MARLEY’S FREEDOM, STILL THERE and UNION STRIKE.