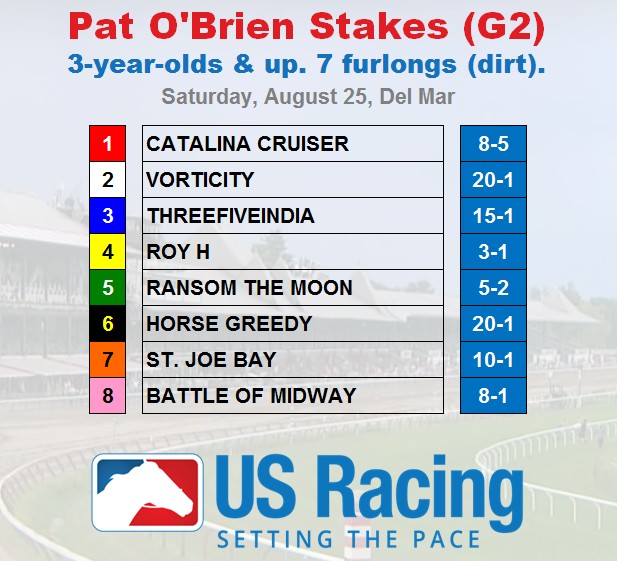 The names of eight horses were dropped into Del Mar’s entry box for Saturday’s $200,000 Pat O’Brien Stakes (G2), with six runners coming from the barn of two leading trainers — John Sadler and Phil D’Amato. Agave Racing’s Bing Crosby Stakes (G2) winner Ransom The Moon has already been scheduled to scratch from the seven-furlong Breeders’ Cup Challenge “Win & You’re In” event, as he’s already qualified for Racing’s Championship Day with his connections looking elsewhere for his final prep. At least a couple others are expected to follow, leaving the field short by the time it leaves the gate at 5:00 p.m. PT on Saturday.

Also, this year’s Pat O’Brien marks the long-awaited return of last year’s Breeders’ Cup Mile (GI) winner Battle of Midway, who was sent back to trainer Jerry Hollendorfer earlier this year after proving to be subfertile in his duties as a stallion at WinStar Farm.

The Pat O’Brien is named for the popular 1930s and 1940s actor who, along with Bing Crosby, built the Del Mar Thoroughbred Club. Throughout his lengthy career O’Brien made more than 100 movies — many to this day are classics and in regular rotation on Turner Classic Movies — and spent most of his summers in what he called his favorite place, where the turf meets the surf next to the Pacific Ocean.

Inaugurated in 1986, it took a few years for the Pat O’Brien Stakes to take off as a must-stop race for local sprinters. And though California-bred standout Sensational Star was victorious in 1990, it wasn’t until eventual Eclipse Award winner and Breeders’ Cup Sprint (GI) champion Lit de Justice took home top honors in 1995 that the status of the event was solidified. The 1996 Breeders’ Cup Classic (GI) winner Alphabet Soup won the Pat O’Brien before his greatest career score at Woodbine that October and, in 2004, Kela gave the late well-respected horseman Mike Mitchell his first Grade 1 winner in the Pat O’Brien.

Other top names to have won the Pat O’Brien include Imperialism, The Factor, Fed Biz, Goldencents and Masochistic.

This year, defending Breeders’ Cup champion Roy H. is back after his second in the Bing Crosby and, with the expected defections of at least a couple of his main rivals, he looks a solid pick to win here. The gelded son of More Than Ready has been training great over the Del Mar surface all meet, is making his second start after his post-Dubai break and gets the services of jockey Paco Lopez for the first time since last summer.

Hrosis Racing’s lightly raced Catalina Cruiser, should he run, cuts back in distance to seven furlongs off his nice victory in his stakes debut in the San Diego Handicap (GII) last month. He drew the rail and will no doubt be gunning for the lead under red-hot regular jockey Drayden Van Dyke.

A year ago, Battle of Midway certainly would have been a prohibitive favorite, even though the distance is probably too short for his liking. This consistent son of Smart Strike, who has only finished worse than third once in his 10-race career, has class to spare, a Hall of Fame trainer and a series of steady and impressive works dating back nearly two months. Surely this is a nice prep for something bigger in his future and perhaps/most likely a defense of his Breeders’ Cup Mile (G1) title.

Threefiveindia makes his first start in the care of Phil D’Amato and, while the Amerman Racing-owned son of Street Hero has had trouble when bumped into stakes company, he could fit better here, especially with his preferred stalking running style. Joe Talamo, who has picked up steam during this later half of the meet, will be aboard.

St. Joe Bay makes his third start for Hronis/Sadler since being claimed from Miller back in May. He was a head shy of winning the San Carlos in his first start for his new connections, but was a flat fifth in the Bing Crosby last out. He fits much better here with the competition level mostly lower, so if he can handle the pressure from his stablemate to his inside early on the lead and still have something in the tank, he will make a formidable competitor.

Sadler will also tighten the girth on former claimer Horse Greedy, also owned by Hronis Racing, who was third in the San Carlos Stakes (G2) at Santa Anita in June in his first start for Hronis Racing. He came back to win a nice, 6 ½-furlong optional claimer for his new connections a month ago as a prep for this, so he’s likely a go here. He has the ability to put up big numbers and seems to be improving, so a top placing — if not an upset — under Stewart Elliott isn’t unfathomable.

Vorticity may have found a spot to earn a graded stakes placing for the first time on the West Coast, having earned two (as well as other black type) on the East Coast. He’s one from trainer D’Amato who will likely run and his best should be sufficient to hit the board.

The unusual heat and humidity in the Del Mar area has finally subsided and Saturday is expected to be beautiful with highs in the mid-70s. The Pat O’Brien is the day’s seventh race.