New York Showcase Day at Belmont Park has adjusted due to rain, rain, and more rain.

Set to promote its New York-breds with seven stakes races Saturday, the New York Racing Association rescheduled the two turf races – the $200,000 Ticonderoga and the $200,000 Mohawk – due to weather concerns for the following weekend.

Five dirt races are on tap Saturday, though, topped by the $300,000 Empire Classic Handicap featuring Hall of Fame trainer Todd Pletcher’s Americanrevolution as the 7-5 favorite in a field of eight 3-year-olds and up going 1 1/8 miles. The 7-year-old Mr. Buff is the 9-2 second choice.

The other stakes are the $250,000 Empire Distaff Stakes, the Hudson Stakes, the Iroquois Stakes, and the Maid of the Mist.

It’s Halloween weekend, and a week before the $31 million Breeders’ Cup at Del Mar on Nov. 5-6, but racing around the country and at Woodbine in Toronto is going full steam. It’s the final weekend of the Keeneland meet, featuring two-time Grade 1 winner Code of Honor in a field of nine in the $200,000 Hagyard Fayette Stakes (G2) on Saturday; and the $100,000 Autumn Miss Stakes (G3) at Santa Anita.

America’s Day at the Races on FOX Sports will have live coverage from Belmont over the weekend, and additional coverage of the Melbourne Cup on Monday night. On Saturday, it’s FS2 from 12-4 p.m.; on Sunday it’s FS1 from 12:30-4 p.m. and then FS from 4-6 p.m.

The Melbourne Cup, Australia’s most famous race and an annual public holiday held on the first Tuesday of November, will be televised Monday night from 10:30 p.m.-12:30 a.m. on FS1 (a preview show will run from 10-10:30 p.m.) TVG also will feature live racing from around the country and Canada.

Here’s a look at some of the weekend races: 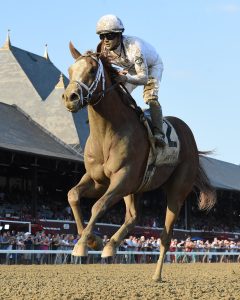 Americanrevolution at the Albany Stakes – Photo Courtesy of NYRA.com

A competitive field of nine is set for the top race on the card, with Americanrevolution the 7-5 favorite coming off a third in the Grade 1 Pennsylvania Derby behind Hot Rod Charlie and Midnight Bourbon. Prior to that, he won the New York Derby and the Albany Stakes.

Mr. Buff, trained by John Kimmel, is making his 47th career start – the gelding has a record of 17-8-5 and earnings of $1.4 million for Chester and Mary Broman.

Trinni Luck, despite drawing the outside No. 10 post, is the slight 7-2 favorite over Ice Princess, who drew the rail. Trinni Luck has won three allowance races in a row — one of them an allowance optional claimer for trainer Rudy Rodriguez. Ice Princess, trained by Danny Gargan, had an eight-race losing streak before winning an allowance at Saratoga on Aug. 19. In her most recent start, she ran second in the John Hettinger Stakes on Oct. 1. 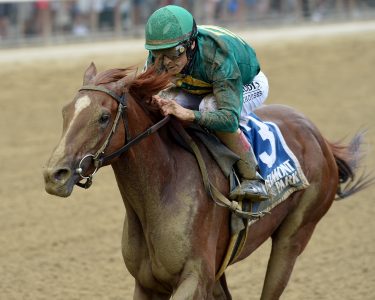 Two-time Grade 1 winner Code of Honor tops a field of nine 3-year-olds, including 5-2 favorite Independence Hall in the 64th running of this race.

Independence Hall comes into the race off a runner-up finish to Knicks Go in last month’s Lukas Classic Stakes (G3) at Churchill Downs. He leaves from post 5 with Javier Castellano aboard.

This will be the final start of Code of Honor’s career. Trained by Shug McGaughey, the 5-year-old won the 2019 Jockey Club Gold Cup (via a DQ) and the Travers and finished second in the 2019 Kentucky Derby

The stakes will mark the final start of Code of Honor’s career. He was fourth in the Woodward (G1) at Belmont on Oct. 2 in his most recent start.

Lightly raced Zero Tolerance faces graded stakes competition for the first time and might just run away from the seven other entries in this one with the meet’s leading rider Flavien Prat aboard.

Based at San Luis Rey Downs with trainer Peter Miller, the filly is coming off a one-length win going 6 ½ furlongs down the hillside turf course in the ungraded Unzip Me Stakes on Oct. 3. 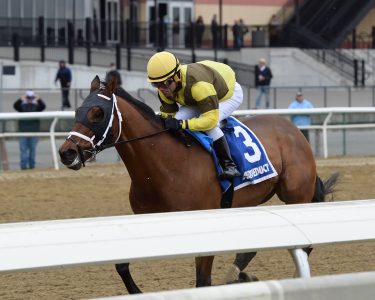 Plainsman at the Discovery Stakes – Photo Courtesy of Joe Labozzetta

Brad Cox-trained Plainsman is a 6-year-old to watch in this one, coming into the race off a one-length win in the Ack Ack (G3) at Churchill Downs on Oct. 2. He has won four of his last five starts and has a 3-1-0-1 record at Belmont (he won an allowance race in 2018).

“He seems to like the track up at Belmont, so it made sense to ship him up for this spot that’s a little easier,” Cox said.

A field of eight was entered.

On closing day of the fall meet, Santa Anita Derby (G1) winner Rock Your World returns on turf to headline a field of 11.

Rock Your World, who won his first two starts on turf at Santa Anita before topping Medina Spirit on dirt in the Santa Anita Derby, is trained by John Sadler. The colt ran a dismal 17th in the Kentucky Derby (G1) and sixth in the Belmont Stakes (G1). He returned after a break and ran second to Medina Spirit in Shared Belief at Del Mar on Aug. 29.

Also entered are None Above the Law – a four-time stakes winner over three different surfaces, Zoffarelli, and Bob Baffert-trained Hudson Ridge. 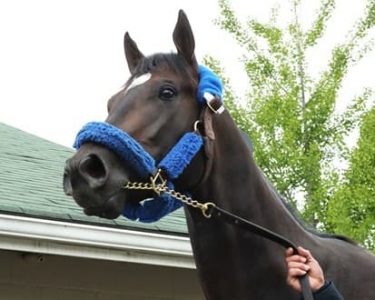 Hall of Famer Mark Casse has three of nine entries in this one – Dolder Grand, Frosted Over, and Swot Analysis.

The usual field of 24 will go to post in the “race that stops a nation” – the biggest race in Australia when most of the nation takes a one-day vacation to focus on the event that began in 1861.

Incentivise, a 5-year-old gelding who won the Caulfield Cup in his last start to run his winning streak to nine, is seen as the favorite for trainer Peter G Moody.

Spanish Mission, a 5-year-old Kentucky-bred trained by Andrew Balding, is a top contender with a career record of 18-6-4-3 for owners Team Valor and Gary Barber.

Twilight Payment, who won last year’s Melbourne Cup, is back for another go for trainer Joseph O’Brien.