In the days leading up to the 38th Breeders’ Cup at Del Mar in California, usracing.com is publishing profile on the horses in the Breeders’ Cup Classic (Saturday, Nov. 6). The profiles will be updated following the post-position draw on Monday, Nov. 1. 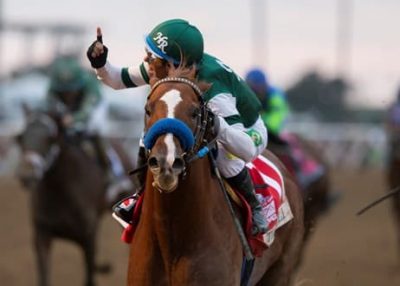 This 4-year-old never competed on dirt until June 9, when he won a preliminary allowance by a half-length. Two races later, he paid $15 in the Pacific Classic (G1), perhaps the weakest “Win and You’re In” race of the year. No matter, it gave Tripoli a free ticket to the Breeders’ Cup, so he’s running.

Trainer John Sadler admitted that without the automatic berth, Tripoli would not be in the Classic. Hronis Racing would have had to pay a $75,000 pre-entry fee and a $75,000 entry fee. “We’re not putting up $150,000,” Sadler told drf.com.

After two wins and a second in three races on the main track, Tripoli was never involved in the Awesome Again (G1), finishing fourth, 8 1/4 lengths behind Medina Spirit after a wide trip. That no-show cost regular rider Tiago Pereira the mount. The switch is a major upgrade, because his replacement is Irad Ortiz, Jr., who is going for his fourth consecutive Eclipse Award. It seems most unlikely that Tripoli will give him his second Classic victory.

The son of distance influence Kitten’s Joy won at the Classic distance of 1 1/4 miles at Del Mar and has some competitive speed figures and final fractions, but he’s never faced the likes of Knicks Go, Essential Quality, Medina Spirit and Hot Rod Charlie. He just doesn’t class up, so he’s up against it.

Betting advice: Ortiz is brilliant, but it’s horse racing, not jockey racing, and expecting Tripoli to win is delusional. No chance.

Notes: Sadler ended his long schneid in the Breeders’ Cup with favorite Accelerate in the 2018 Classic at Churchill Downs. He’d been 0-for-44 at the Breeders’ Cup over 30 years … Hronis Racing, owner of Tripoli, also owned Accelerate. Kosta and Peter Hronis named Tripoli for their father, who was born in Tripoli, Greece … The family owns and operates an 8,000-acre grape and citrus farm in California … Tripoli breezed 5 furlongs in 1:00 Oct. 23 at Santa Anita. “Real nice,” Sadler told drf.com. “Had him going out seven furlongs in 1:25.”