In the days leading up to the 38th Breeders’ Cup at Del Mar in California, usracing.com is profiling the horses in the $2 million Breeders’ Cup Distaff (Saturday, Nov. 6). The profiles will be updated following the post-position draw on Monday, Nov. 1.

Todd Pletcher has trained many outstanding fillies and mares, including 2004 Distaff (G1) winner Ashado and 2007 Belmont Stakes (G1) heroine Rags to Riches. Malathaat has a chance to be remembered as one of his best girls. 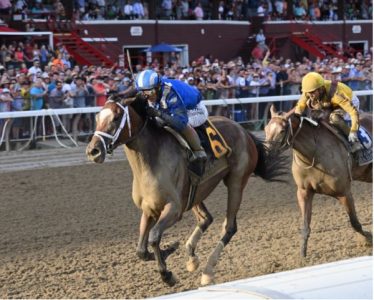 Malathaat at the Alabama Stakes – Photo Courtesy of Chelsea Durand

She’s a head away from being 7-for-7, and the loss gets a giant asterisk. The 3-10 favorite was hounded all the way in the Coaching Club American Oaks (G1), first by Maracuja, then by Clairiere, before 14-1 shot Maracuja wore down Malathaat in the final strides.

As expected, Malathaat rebounded by taking the 1 1/4-mile Alabama (G1) on Aug. 21 despite stumbling at the start. She’s being trained up to the Distaff, and the 11-week layoff shouldn’t be a concern. Pletcher is brilliant at getting horses to peak off long layoffs, winning this year at 22% off breaks of 46 to 90 days.

“I think the time between races has done her good,” he said. “She’s put on some weight, and she seems very fit and happy.”

Malathaat rarely wins by much, with the Alabama’s margin of 1 1/2 lengths the biggest in her last four victories. She’s a classy fighter and a strong finisher, although not the easiest horse to ride. John Velazquez said as soon as they made the lead in the Alabama, he thought he’d “gotten there too soon. But that’s the way she does things.”

“I think she likes playing with horses,” Pletcher said that day. “She identifies a target, and when she gets to that target, then she kind of thinks ‘Next game.’”

“I thought she worked great,” Pletcher said. “She was very impressive. She keeps going and going and gallops out super.”

Betting advice: Malathaat has an excellent chance to win, and for once she won’t be overbet. Division leader Letruska will be favored, and she’ll likely face pace pressure from Shedaresthedevil, Private Mission and Horologist. Malathaat should sit a good stalking trip and be ready to roll in the stretch.

Notes: Pletcher, racing’s all-time earnings leader, was inducted into the Hall of Fame this summer. He has 11 Breeders’ Cup wins, including the 2019 Classic with Vino Rosso. Besides Ashado, he also took the Distaff with Stopchargingmaria (2015) … Malathaat is one of many Grade 1 collaborations with fellow Hall of Famer Velazquez, who has 18 Breeders’ Cup wins. Together they won the 2017 Kentucky Derby (G1) with Always Dreaming.