Breeders’ Cup: A Perfect Finish for Bricks and Mortar with Victory in BC Turf 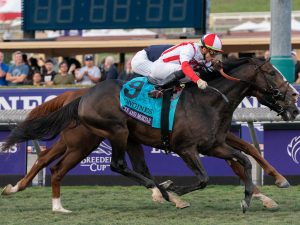 Bricks and Mortar completed a perfect season and staked his claim for Horse of the Year with a rousing victory in the $4 million Breeders’ Cup Turf (G1) on Saturday at Santa Anita Park.

With trainer Chad Brown cheering him on in the stands, Bricks and Mortar clawed his way to the front coming out of the final turn and then outkicked 50-1 long shot United to hit the wire a head in front.

“The mile-and-a-half was a big question mark,’’ said Brown, who won his 15th Breeders’ Cup, 13 of the turf, including three in this Breeders’ Cup. “Irad (Ortiz) rode a great race.”

With Midnight Bisou suffering her first loss this year in the Distaff, Bricks and Mortar appeared to have solidified his grip on Horse of the Year.

“After what you saw today, with his victory, and a couple (of losses), I think it’s a no-brainer,’’ said Brown.

Sent off as the even-money favorite, Bricks and Mortar returned $ 4 on a $2 win bet.

Owned by Klaravich Stables and William Lawrence, five of Bricks and Mortar’s six wins in 2019 have come in Grade 1’s – the Pegasus World Cup Turf, the Turf Classic, the Manhattan and the Arlington Million are the others.